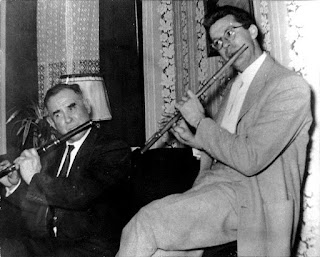 The sad news of 29 October was that Boston lost musician Eugene F. Frain. I first met Gene when I was writing "See You at the Hall: Boston's Golden Era of Irish Music and Dance." I visited with Gene in his Watertown apartment one afternoon, much of which was spent listening to his amazing collection of recordings of Irish and Cape Breton musicians, mostly from the 1950s and 1960s. Gene later sent me several cassettes of some of these classic recordings, a major treasure in my collection.

Here's a photograph of Gene (right) with his father, Owen Frain. These photos are from the collection of Frank Storer, a contemporary of Gene's.

A little about his Dad: Owen Frain (RIP)~ (flute and piano) was born in 1896, and grew up in Roskey, Co. Mayo. At about age fourteen, he left Ireland to work in England's coal mines. He joined the U.S. Navy and in fact was stationed on a ship that sank off the coast of France. At about age twenty, he arrived in New York City, and studied flute with a flute and pipe player who recorded with James Morrison.

Later settling in Boston, Owen made many records with Dan Sullivan's Shamrock Band, including the Hanafin brothers and Neil Nolan, beginning aboutl925� the first traditional ceili band recordings. They played in the famous dance halls of Boston, usually on Dudley Street in Roxbury, where the immigrant Irish people and their American Irish children danced the sets and ceili dances played by the finest musicans.

The following information comes from Gene's obituary on the funeral home web site:

Mr. Frain, a son of the late Owen and Margaret (McSeeney) Frain, was born in Somerville, but lived most all his life in Watertown. He was a graduate of Watertown High School and served in the US Army in the 7th Division Band during World War II. He served another term of duty during the Korean Conflict also with the US Army Band.

Mr. Frain was an employee for 45 years of Haartz-Mason Company in Watertown until his retirement. He was a member of the Ancient Order of Hibernians Tomas Cardinal O’Fiaich Division 14, Watertown, and the Knights of Columbus Council #155, Watertown.

Mr. Frain was a lifelong and accomplished musician, specializing in the tin whistle, flute and piano. He was recognized by the Comhaltas Ceoltoiri Eireann Northeast Region of the North American Province by being inducted into the Hall of Fame in November 2005.

The following quote is from the web site of The Comhaltas: Hanafin-Cooley Branch in Boston which promotes traditional Irish Culture, Music and Dance in the Boston Area:

“Inducted to its The Hall of Fame by
The Northeast Region of the North American Province – November 5, 2005

Owen Frain's son, Gene, was born in 1926 in Somerville, Massachusetts, and at an
early age moved to Watertown. Gene was given a whistle as soon as his fingers were big
enough to cover the holes. And later, when his fingers had grown enough to span and cover the holes on a flute, he was given a wooden flute. At age fourteen Gene began to learn the silver flute, but at first everything he did to play good Irish wooden flute was incorrect for his classical music playing. He persisted, and played well enough to perform for his country in the U.S. Army Band for three years. He made 78 recordings with Billy Caples on the piano, in the 1950s, Billy Caples having been a graduate of the Berklee College of music and a great teacher, and a performer for many years in the dance halls of Boston.

Besides his lovely playing and repertoire, always welcome, Gene Frain has been known throughout his life as a rich source of music and Irish music history in the Boston area, generous with his knowledge and helpful to all-an essential part of the survival of such an oral music tradition."


Mr. Frain played in a number of Irish bands and was interviewed by Susan Gedutis for her book, "See You at the Hall: Boston's Golden Era of Irish Music and Dance." He died at his residence on Wednesday, October 29, 2008. He had recently celebrated his 82nd birthday earlier in the month.


He was the devoted brother of Katherine Frain O’Brien of So. Weymouth, John P. Frain of Watertown, Paul J. Frain of Bellingham, Maureen Frain Villemaire of Arlington, Tex., and the late Margaret Frain Martino; and was also loved by 12 nieces and nephews.

His funeral was celebrated on November 1, 2008 in the MacDonald, Rockwell & MacDonald Funeral Home at 270 Main St., Watertown. He now rests in St. Patrick Cemetery, Watertown.