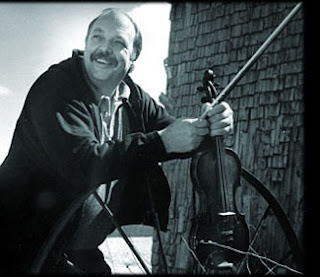 How freaking sad. And to find out on Facebook.

The great Cape Breton fiddler and extraordinary human being Jerry Holland has just passed away--last night, I believe. This is such new news to me that I don't even know how he died yet, but it is surely related to the cancer he's been battling for the last couple of years.

A fiddler with such instant connection to the instrument that the two may as well have been one. And the most completely down to earth, easy, and genuine human being one could imagine.

Steve and I saw Jerry play at the Olde Inn in West Dennis a couple of years ago. He played with Sean Brennan (or was it Bill Black?) backing him. They'd never played together before, that much I know. Jerry played the three hour set with such ease, grace, and not a single wrong note played the entire time -- all of this with a guitarist he'd never met before the show.

We met Jerry first about five years ago in Cape Breton. I was writing an article for Irish Music magazine about the Celtic Colours festival. Through Jerry's manager in Cape Breton, we arranged to meet him for a potluck dinner that was held in the community hall before one of the Celtic Colours shows. I was nervous as all get out, but Jerry invited me to sit down next to him for dinner. He found out Steve was outside (we felt funny having "free dinner" for two when it was only one of us doing the article) and Jerry personally got up and dragged Steve in for dinner. Lovely chat... which continued outdoors, while Jerry had a smoke and got ready for the show. Nothing special in the conversation... chatted about Boston, about his work as a mechanic. A car mechanic. His hands were black from having worked on cars all day. He talked then about some horrible back pain he had, and how he'd really been having a hard time. Must have been the early stages of cancer.

Then he went in and played a two hour concert of the most delicate, agile, and beautiful fiddling we could imagine.

During that concert, he played "Lament for Herbie McCleod," a tune written for a Cape Bretoner who'd made his home in Boston, where Jerry is originally from. (Well, Boston area, that is.) It was so moving, so gorgeously done, that I ran to the merchandise table and bought his book, and have been playing the tune in concert, every time we hear that another of Boston's senior musicians has gone on to that Big Session in the Sky.

Guess what tune I'll be playing in Day 17's session? God bless you, Jerry, and thank you for being one of the magical ones. I'll post more info as it comes.
Email Post
Labels: 100 Days of Practice Day 17

played new set only. I think the sound is better but 1st lesson with Music Momma will tell. Still thinking about legacy left by that great fiddler. How lucky I am to be part of this music.
July 19, 2009 at 10:56:00 AM EDT