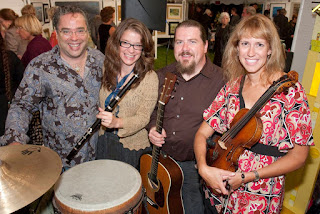 Well... it would appear that I'm slacking on the writing... but not the practice. Instead, I've added to the task, now making sure that every day includes practice on not one, but two, instruments: sax and flute. Could be alto, soprano, or baritone sax... always Irish flute, and sometimes ALSO adding silver. 100 days isn't enough. Gotta add more weight. So far today: just Gershwin on sax. And some reels... some really cool sax music in store!

Anyway: This week's rehearsing time is all geared toward our next Tuesday's concert at Church of the Pilgrimage, which we will be recording. Here's info on the concert.

The Lindsays, Traditional Irish Music and Then Some

Free and open to the public


(PLYMOUTH, MA) – Husband-and-wife duo Stephen and Susan Lindsay return to the Music for a Summer Evening music series on Tuesday, July 28, 8:00 p.m. at the Church of the Pilgrimage, 8 Town Square, Plymouth. The Lindsay’s music is rooted in the Irish tradition—including upbeat instrumental tunes on flute, saxophone, and fiddle—but this year’s program extends to surprising places, including story-songs of love and war from contemporary Irish singer Christy Moore, pillar of British rock Paul Weller, and American songwriting icon George Gershwin. Tuesday’s program will also include some familiar Irish sing-alongs for a friendly evening of Irish-inspired music. Special guests will include: Brian Haley on conga and djembe; Nikki Engstrom, Cape-based fiddler whose recording Another Round won the Celtic Radio.net’s Album of the Year in 2008; and Plymouth resident Salil Sachdev, world-renowned percussionist, filmmaker, and chair of the Music Department at Bridgewater State College. Concert is free and open to the public.

Susan (Gedutis) Lindsay is a Plymouth native and author of See You at the Hall: Boston’s Golden Era of Irish Music and Dance. She teaches in the Music Department at Bridgewater State College, and is a freelance music writer and editor for a varied roster of clients, including Berklee Press, Berkleemusic.com, and the Boston Irish Reporter newspaper. She completed her Master of Music in Ethnomusicology at Tufts University in Boston, and earned a Bachelor of Arts in music from Hampshire College in Amherst, Massachusetts. In addition to the Lindsays, she also performs on baritone saxophone with Cape-based swing band Stage Door Canteen, and with children’s entertainer Debbie and Friends.

Stephen Lindsay is originally from Dublin, Ireland but now calls Plymouth home. His musical style was forged in the numerous Irish ballad sessions in and around Dublin’s northside, where traditional Irish ballads sat comfortably alongside newer songs from Christy Moore, Neil Young, or Bob Marley. Together with his band Celtic Symphony, he founded a long-time singing session at the Lighthouse Bar in Howth, a historic fishing village in northern Dublin that is also home to Barney McKenna, banjo player from the famous ballad band the Dubliners.

Since Nikki Engstrom's teenage days performing in (and winning) countless fiddle competitions in New England and Canada, she has delighted audiences with her spirited jigs, reels, and sensitive slow airs. Today, she performs with guitar/songwriter Sean Brennan in the Cape-based duo Stanley & Grimm, and also is the anchor of “Sonnay”—an all-ages fiddle group that consists of more than 25 of her students. Her recent CD Another Round won Celtic Radio.net’s 2008 album of the year.

Salil Sachdev, born in India, now lives in Plymouth. He is a composer, percussionist, filmmaker, and chair of theMusic Department at Bridgewater State College. His interest and research in world music has taken him to various parts of India, Ireland, and Africa, where he studied West African (Djembe) drumming, hand percussion, and Solkattu - the rhythmic solfege language of South India. In 2006 he completed a documentary film on the music of the Sidis, an ethnic group of East African ancestry living in India for since the last 800 - 900 years. Currently Salil is completing a film on the traditional music of Mali, West Africa. He holds a D.M.A. University of Miami, M.M. Ohio University, M.A. Northwestern University, and B.A. Delhi University.

Unknown said…
I heard someone mention at the farm today that you had a blog, so I had to google search it, so I could comment to say that you and your husband are very talented, Sue, and your music added so much to the annual farm potluck. Thank you for sharing your talent and joy with us all!
September 26, 2009 at 4:46:00 PM EDT