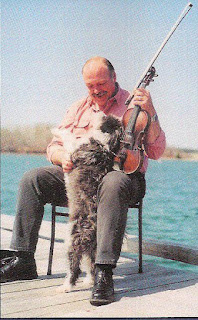 From "Summertime," composed by George Gershwin for Porgy and Bess (1935).

Yesterday, Jerry Holland did just that: rose up singing, flew to the sky...after a two-year battle with cancer. He was 54.

Why? Why Jerry? Why do the good ones go so early? It's the question we can't help but ask. Seems the good ones deserve more summers. But I suppose that before we shake our fists at the heavens, let's redirect the question, "Why?" Let's ask this question not about his death, but about his life.

Jerry Holland spent his life answering that question. Born and raised not too far south of Boston, Holland's father was a musician. His parents brought him along on Friday nights to the Rose Croix, a dance hall in Dudley Square, Roxbury, MA, where the Downeaster set living in Boston would go to dance. As a young lad, he watched and listened to the finest of Cape Breton musicians in Boston: "Winston Fitzgerald, Bill Lamey, Angus Chisholm, and several other less well-known fiddlers, including his father," his bio states. Pianist Janine Randall (daughter of Downeaster Johnny Muise) told me years ago that she remembers being a young child with Jerry at these halls, the two of them playing in the lobby during the dances, swinging off banisters, dodging parents' suits and crinoline skirts. He absorbed the music, and by 1976, as a teen, had become an extremely talented fiddler. He relocated to Cape Breton, which has been his home ever since. A lifetime of international touring, performance, and composition has made us one of the stalwarts of Celtic music. (More about Jerry's background on his own Web site.) But above it all, there is a statement on his Parlor Music CD that seems to encapsulate what music was about for him:

"Two old friends who occasionnaly string together a few tunes in someone's welcoming living room; that is the humble context in which traditional music's vitality has been sustained over the centuries. On this recording, which pretends to be nothing fancy, we hear two of Cape Breton's finest players in such a setting."

That says it all.

For those who would listen to his music--full hearted, joy filled, ego free, attached to neither fame nor fortune, unpretentious, committed and connected to those around him, as he so clearly was--isn't that a way to answer that eternal question, "Why?" Isn't that what music making is about? Expressing both the question and the answer that is beyond words, words that cannot be uttered but only felt?

Right after I learned about Jerry Holland's passing, my friend fiddler Beth Sweeney stopped in. We shared a sad moment, and then swapped our own recollections of Jerry Holland. We didn't really know him, but both has met him more than once. And we have both been touched by his music and his presence. She recalled back to 1993, when she first discovered Jerry Holland's music. She was a little embarrassed to admit that she remembered having said to her then-new boyfriend, "I'm going to measure my life by "before" and "after" hearing Jerry Holland." We chuckled, but really it's not all that funny. That's what kind of musician he was: so significant that a person can say that his music made a marked change in their life. There is something in his music. Something in his playing, his phrasing, his meaning that awakens us to some new vision, an audible, singable representation of the things that life can be.

Beth and I honored Jerry's passing by playing a few of his tunes, in my backyard. We shared his depth by playing "In Memory of Herbie McCleod" and celebrated his joyfulness by playing one of his most well known and often-played compositions, "Brenda Stubbert's." We were surely not the only ones playing his tunes today. Jerry's feet must be tapping somewhere, with any one of his hundreds of compositions being played and celebrated by those whose lives his music has touched.

Jerry Holland has gone to the Big Kitchen Party in the Sky, as they say in Cape Breton. He died too young, but I can't help being philosophical: There was a reason he was here. We can't quite put that reason into words, because words are too small, too limited. We who have been touched by his music mourn him now because we have received his message. If we must ask, "Why?" then that's our answer: we have received his message. And we can be nothing but thankful.

In my July 15 entry, I quoted Hazrat Inayat Khan: "Sound becomes visible in the form of radiance." Jerry, the physical man may have relented, but his spirit surely has not. And now we can enjoy Jerry for what his music always was and always will be: pure radiance. May his soul fly onward and rise to the sky.
Email Post
Labels: Cape Breton Events General Musings Poetry

Peig said…
How hard is this.

Grief is one of the most selfish human emotions. Mostly we are sorry for OUR loss not the one who is gone.

I have found it helps me to celebrate one's life by emulating the best of them. Then they always feel amoung us.

Another huge loss to the music community.

John MacDonald said…
I saw Jerry play with John Doyle
at the Festival Club at Celtic Colors at 2:30 in The morning.It was the best 1/2 hour of music I've ever witnessed in my life.The smile never left Jerry's face.They shared a suprising but incredible musical bond.They only stopped playing because they ran out of time.
July 17, 2009 at 10:02:00 PM EDT

today was a family day around the pool. Kids playing and our children being parents. Very proud of the people they have grown to be.

Truly a day of contuim ribbon.

Played through one set over and over. Trapped in the pattern of sameness. Two jigs with the same two measures. A bit maddening. Need to sort that out next week.
But DID play with purpose.