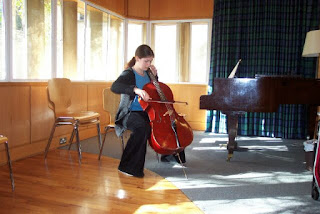 One of the great things about teaching is what you can learn from your students.

Today in my Music Appreciation class at Bridgewater, a student asked me, "How much DO conductors make anyway?"

But, unsure, I decided to look it up. Imagine our suprise when we read a 2006 Boston Globe article:

James Levine is not just among the most acclaimed music directors of his time. His combined salaries from the Boston Symphony Orchestra and New York's Metropolitan Opera make him the highest-paid conductor in the country, according to the most recent Internal Revenue Service filings.

The BSO paid almost $1.6 million for Levine's services during the 2004- 05 season, his first leading the orchestra, according to a tax filing the Globe obtained yesterday. The money was paid to Phramus, Inc., a New York-based firm. According to the Met's most recent filing, it paid slightly more than $1.9 million to Phramus, Inc., care of artist manager Ronald Wilford .

Good reason to practice with that baton.

But what about the musicians?

SimplyHired.com tells us that the national average salary for orchestra player jobs is $37,00. Average orchestra player salaries can vary greatly due to company, location, industry, experience and benefits.

Salary.com doesn't have a category for musician in its database. Not a real job, apparently. But, they do tell us that a music teacher makes an average of between $31k-$65k. The average music PROFESSOR makes in the range of $64,540-$121,426.

These are decent reasons to practice.

I really liked what payscale.com had to say about it, too.

Musician Salary Overview
"Music is a discipline, and a mistress of order and good manners, she makes the people milder and gentler, more moral and more reasonable." - Martin Luther

While it's perhaps not the goal of every musician to make people more moral and reasonable, it can't be denied that music and musicians play a huge part in human society and have for thousands of years. "Musician" is one of the oldest professions known to humankind. Long before there were accountants, biologists, lawyers or bartenders, musicians were already carving out their niche in society. As with a majority of artists, musicians are not typically the most well-paid group of people. When you think of "musician salary," do you picture a best-selling recording artist or that guy you just passed on the subway - the one with his guitar case open, playing for dollar bills? Those who become famous and earn a huge musician salary may be far and few between, but it's entirely possible for many people to make a good living as a musician. Salary will of course vary depending on a musician's skill level, the industry in which he or she works and more.

You can read the full article and salary report here.

This article on payscale.com is also interesting.

Overall, a viable career... if you practice.
Email Post