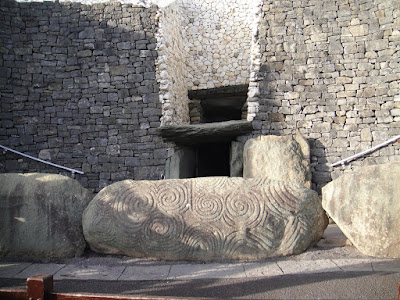 3:50 a.m. Plymouth; 8:50 a.m., Dublin. Literally at this very moment in Newgrange, County Meath, Ireland, the sun is rising over the hills across the Boyne River and shining its first rays into the little space called a "light box" above the doorway of a massive burial mound built around 3,200 BC and rediscovered in 1699. The sun's golden rays (if it's sunny, and it being Ireland... well, you never know) will creep down a chamber and, for 17 minutes, they will illuminate a stone cruciform chamber that holds three small spaces, one to the front, and one to each side. This happens every year on Solstice, and for a few days on either side of it. At all other times, the chamber stands black.

About 100 people are at Newgrange now, standing outside the massive circular mound. They are winners of a lottery, as every year, the folks at Newgrange draw 50 names from some 28,000 applications, and the winners are given the opportunity to observe the sunrise at the megalithic site. 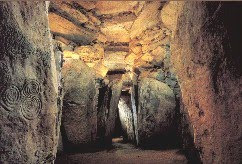 In 3,200 B.C. when the place was built, how many were standing there, and why? No one knows for sure what Newgrange and other megalithic structures like it were used for: burial tombs, temples, or astronomical observatories? If a burial mound, what did the remains of these apparently VIP dead farmers do with the light? Write letters? Patch up holes in their rapidly decomposing tunic? Read that book they never had time to get to while they were busy administering rules and regulations for the local farmers?

Either way, it would seem that renewal would be the order of the day, even for dead farmers. Winter solstice is the shortest day of the year, and after it, days lengthen by just a few minutes a day. It's easy to imagine why this would be a sacred event in a country whose days last just 7 1/2 hours at this time of year. A bit of light in the darkness.

This Biblical passage comes to mind, Matthew 4:16: "The people living in darkness have seen a great light; on those living in the land of the shadow of death a light has dawned." Early Christians in Ireland were wise to place their important Christian events in line with pre-Christian tradition. Christ's arrival at Christmas as a light in the darkness, as God-comes-to-Earth, makes perfect sense at Solstice. It is midwinter's day, the return of light in the Celtic season in the heart of Samhain, the dark season when the Celts believed that the veil was thinnest between this world and the other. Good time for the heavens to arrive on Earth.

And what does this mean? We pray a little with our morning coffee? Catch the sunrise on the beach? (I would try that, but I'm afraid I won't make it back up my driveway.) We've tried to bring this tradition into our home, this sense of renewal amid darkness, by holding a solstice music session. The one we scheduled for today got cancelled, though, as there's nowhere to park, thanks to the 24 inches of snow that fell yesterday. Now what do we do? One tradition we probably can manage is to adorn the home with greens--another pre-Christian tradition that has been appropriated by Christmas. Somewhere, I once read that the Celts would keep them in place until Feb. 2, the transitional day of the new season, Imbolc, at which point, the greens were burned. So we'll try that, but we'll really miss our session. I'd say, "Darn snow!" except that it's gorgeous out there.

A very happy solstice to you, and wishing you joy and renewal on this the shortest day!

For much more information on Newgrange, visit www.knowth.com/newgrange.htm.