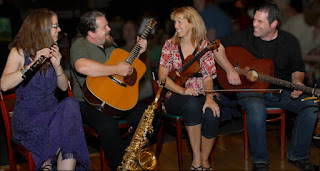 Good morning, good morning! We know it's spring in Plymouth when the black swarm returns. It's sunny, it's warm, and it's time for ants, mosquitoes, bees, and Harleys. The largest of the black flying insect species, Harleys make nests in four key spots, according to subspecies: the partyboy bikers park at T-Bones, the ex-alcoholic bikers park at Dunkin' Donuts, the executives who trade the white collars for black leathers-on-Sunday park at the ice cream shop, and the married couple bikers are at CabbyShack... We've got a swarm here, folks. Someone call Terminix.

On the musical side: It's been a little more perspiration than inspiration lately, I know... not too much insight or wit coming from Soul Mama lately... but allow me to be newsy not meaningful just one more day before you begin to think that this really is all about me:

The Lindsays had a great night at the Navigator Coffeehouse in Falmouth last night. If you like acoustic music, then most definitely get yourself onto their mailing list. It's run by musicians Manny and Linda Diaz, a married couple who also performs together in a duo (Jeesh, some people... ).

Last night, we played the opening set, followed by a set from Nikki Engstrom and Sean Brennan in Stanley and Grimm, then we all came together at the end of the show for three pieces as a a powerpak four-piece... seemed to be everyone's favorite part of the night, including ours!

As Sean says, we've been dancing around the supergroup idea, so watch this space for more four-piece collaborations. Also, watch this space because the Falmouth Enterprise shot some video and they'll be posting it soon.

It's a great life, I tell you! And this WEATHER.... glorious! But where's my OFF?
Email Post