I am so happy to have a few minutes to write that I'm almost not sure what to say. Except I am sure.

In the last two weeks, when I haven't been writing because I've been too busy working, I admit that I have also seen a most amazing array of music.

Check it out, if you want to catch up with some new music:

Lunása: Saw them at Liam Maguire's, a great small venue to catch such a "supergroup." Just released their new CD, Lá Nua. Flute player Kevin Crawford is most definitely the most entertaining front man ever. Perhaps even more than the music, we enjoyed the on-stage banter and craic between the guys. I gotta say, though, I've seen them a lot of times, and this was probably the least inspired performance I've seen. These are without question some of the best players in traditional music, but I'm taking a guess that we might have caught them on an off night, perhaps because Seán Smith had been celebrating his birthday in Boston the night before. We bought their new CD, and I'm still breaking it in. Produced by bass player Trevor Hutchinson, longtime formerly of the Waterboys, the CD is so polished sounding that, to me, it loses some raw sparkle. It feels perfect but somehow not exciting or inspired, and believe me, it HURTS me to admit this because this is most definitely one of my favorite bands in the world. Still, great band, and it really is absolutely worth buying the CD. In particular, Kevin Crawford's writing on "Tune for Dad" and "Island Lake" is dependably gorgeous, and that alone is worth the price of admission.

Classical guitar recital by Tom Rohde: Performing works by late Romantic Spanish composers. Tom performed a solo recital last week at Bedford Community College, and did a dress rehearsal in my Music Appreciation class. Beautiful pieces, inspired by places and culture in Spain, typical of late Romantic nationalism. While he might disagree with me, Tom is a master of the classical guitar.

Veronica Robles and her Mariachi Band. Oh, such fun. Veronica Robles is a star, for sure. Stage presence, absolutely gorgeous... and she wore these: Plus, the band... Honestly, I'd consider leaving Irish music to join a mariachi band if it meant that I could wear mariachi pants every night. Irish musicians, when it comes to costuming, we've been gypped. 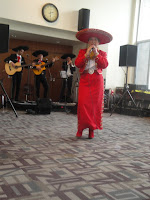 The band plays a range of classic Mexican folk, but also includes contemporary pieces like "Tequila" and my favorite, Patsy Cline's "Crazy" in their set. Great stuff. Look for Veronica on Facebook, too, and on Saturday mornings on the Spanish cable station Telemundo. She hosts a show at 10 am.


Marcus Santos: Brazilian percussionist and his band. Santos is a native of Salvador, Bahia in Brazil, but living in Boston. INCREDIBLE! So exciting I cried. Ok, ok. So you think you can't sit through over an hour of extremely loud samba drumming, while sitting in a dry auditorium in a small, underinspired looking audience? A performer's nightmare... small audience, spread all over the giant room, and you're playing dance music and they're sitting in their seats. But that's not a nightmare for Marcus... by the end of the performance, he had just about everyone up on their feet doing samba. Love this guy. 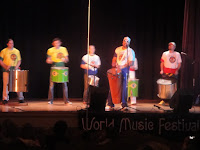 Christian Stevens: Box player who joined us at World Music Festival... he also just came out with a new CD, that has gotten rave reviews from people in the know. I haven't had a chance to listen, but I trust my sources. Check it out: The Press Gang.

The Hot Tamale Brass Band. Five big guys full o' honkin' funky Boston-based New Orleans jazz. And they march, too. Watch for them in your next parade. I sat in with them a bit on soprano sax and it was a blast!

The Male Bonding Band -- bunch of guys who just like to sing and only a few of them really know how to play their instruments, but that's forgivable because they really were having fun.

Khakatay: The coolest African drumming ensemble in the world. A great bunch of Bridgewater State College students and even some staff, led by Dr. Salil Sachdev, department head. I've gone on and on about them before... see here...

The Alley Cats: So fun! They sang "Mr. Sandman," "Stray Cat Strut," and "Witchcraft"... all in leopard skin. I'd like to link you to their website, but there are about ten other a cappella groups with the same name. So, a photo instead. 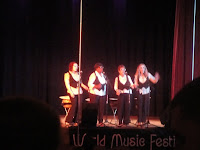 The Big Apple Circus Orchestra -- amazing!!!!! And the flying trapeze dudes aren't bad either. And Bello the Clown: The coolest, non-creepy and most talented clown we ever did see... Got pics of this too, but the camera is AWOL at the moment.

Bridgewater State College Chamber Singers and the BSC A Cappella Group -- So much joy and so much talent. 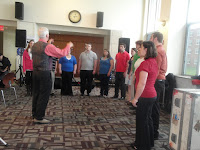 Of course, this is a more appropriate photo of the group, with Veronica Robles... 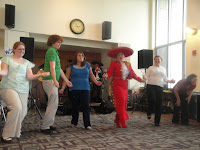 It's that time of year. Lots of concerts and lots of activity as the semester closes... but lots of fun!
Email Post