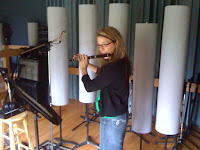 The odometer's about to turn... all those 9s disappear tomorrow into 300 days! I spent much of yesterday at Sounds Interesting Studios with Stanley and Grimm (Nikki Engstrom and Sean Brennan) putting flute on some jigs and a really cool hornpipe. Their CD will be coming out this summer; watch for it.

One of the challenges of being a musician is that sometimes you have exactly four days to learn a tune that's going to be on someone's CD. That's not easy, and you really do have to let go of the panic part and embrace knowing nothing if you're ever going to learn.

Let me get all yogic on you. This one's a quote my sis sent yesterday. It is a reminder of what it's like to allow ourselves to be in a state of continual learning, that is, learning new musical things, accepting new challenges. Practice can most certainly be about maintenance but most of us, whether we choose music, yoga, art, weight lifting, distance cycling, or Olympic Pint Guzzling (don't laugh; they're considering it for an Olympic sport in Europe), are always trying for better/more. Thoughts on this from In Search of the Warrior Spirit, by Richard Strozzi Heckler:

"The metaphor of the cup and the quart: The cup represents who we are now. It's the amount of love, responsibility, power, what have you, that we have come to call our own.

"Across the table we see the quart. The quart represents what we can become, our potential.

"Realizing that the quart is within our reach and that the cup is no longer satisfying to us we decide to go for more, to reach for the quart of our self. As we put down the cup in order to take up the quart we realize...that we are empty-handed; we have left the known, yet we have not yet reached who we can become.

"Passing through this 'empty-handed' state is...crucial..."

This is the path of yoga. Feeling and honoring the fullness of This Cup that
is Who You Are Today, while you reach toward The Quart, or more correctly,
into The Universe of Possibilities, that is also What You Are.

(Music, like yoga,) ... can be a study of relationships: our relationship with who we are, who we are becoming as humans, but also recognizing the essence within, the unchanging, the eternal.


Yes, it's a little New Agey and Soul Mama would never get that way, no sirree Bob, not me. Oh, not me. Not me at all. (Doth I protest too much?) However... I read it, thought about it all day, and am still thinking about it now. It is a lovely metaphor for an expansive musical practice... Thanks, Sis.
Email Post