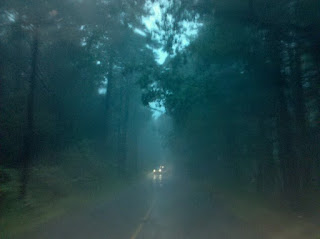 Maybe it was the pathetic looking brown grass and droopy chrysanthemum leaves, or maybe it was the chance to wear the new rain boots, but man, was it great to have flooding rains break the drought yesterday!

Weather bedamned, we're okay here, because we're almost done with the long-awaited (at least by us) recording that we started back in October. Tuesday, we were at Sounds Interesting again, to work on Steve's last song, "So Do I," then a redo of saxophone on "Ordinary Man" and a re-do of flute on "One Last Cold Kiss"--and several very sad attempts at my harmony vocals.

We have TWO songs left for harmony vocals to record on Friday morning, and we're done. The harmony vocals are painful, because Miss Suzy has written harmonies too high in her range and thus cannot sing them in tune. Talk about facing reality. But still, let's repeat this part: two more songs, and we're done.

Not quite done, of course. As I've mentioned, our engineer Rob promises that at least a week of mixing is ahead, then the CD gets sent to a mastering house. That, too, will take a week and will probably happen the first week of August. Once we get the mastered CD back (sometimes it's called a "glass master" even though it's not on glass anymore), we listen to it to ensure that it's right.

Meanwhile, I go to Songfile.com, the website for Harry Fox, which is a performing rights organization that ensures that all songwriters get paid for their great songs. I go to the site, log in, enter the song name, and Songfile pulls it up out of the thousands and thousands and thousands of copyrighted songs. I click on the song to add it to my cart, then continue on to search for the next. Right now, I have four songs in my cart, so I owe Harry Fox 0.091 cents per song, per unit. That means if we do 1,000 CDs, then I will be sending $91 to each songwriter whose work appears on it. For us, that means that about $364 will be going out to these creative folks, plus there are another three for which we owe money to Wally Page, an Irish songwriter who's not registered with Harry Fox. Where this money is coming FROM is debatable, but that's why we're banking on that moving target: CD sales.

At the same time, I'm writing copy for the cover and trying to put together the big collection of photos I shot in the studio, for the cover design. This gets sent to the designer Megan Harding, and we can expect a week of back-and-forth there, too, to get the design just right, to tweak the copy to fit the space, to get the colors the way we want them...

At the end, all of these things get assembled: the (not)glass master, the design files, and the licensing information, and I send it with a big fat check to DiskMakers. And hopefully, as I've said, we get it in time for August 24. It will be close, and in fact, it may be unlikely. Either way, it's gonna be done. And we hope you like it.
Email Post