Playing for Kids and Starting a Book 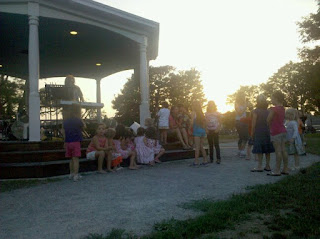 Soul Mama spent last night on the North Shore, playing with children's artists Leeny and Tamara in a gazebo in downtown Manchester-by-the-Sea, a lovely mountain town. Just kidding; the town is not in the mountains. It's actually in rural farmland in the midwest.

The sun set over the white pleasure boats while Leeny and Tamara and their band rocked a large crowd of energetic Little People. I know Leeny from having worked with her at Berklee Press, and she is already a walking standup routine, but to add music? My little girl and her friends love Leeny's two albums, the first with Steve, Leeny and Steve, and the second Sharing the Same Stars. Great music, but to see her live with kids doing her best Phil Donahue meets Seinfeld meets Fozzie Bear (ok, nothing like Fozzie Bear but I can't think of any children's comedians) then singing like Janis Joplin meets Freddie Mercury meets Frank Zappa (she will NOT approve), my friends, we got ourselves a stah heeyah.

Meanwhile, Soul Fry was with Daddy taking her first step dance lesson, and as much as I love to play music, I gotta tell ya, it was with great regret that I pulled the packed jeep out of the driveway. It doesn't help when the leaving was preceded by a crying "MommyIdon'twantyoutoleave!!!!" moment.

But when I finally arrived home after a fun gig and dinner courtesy of Leeny and her hubby Nick, I got to see photos of Soul Fry in her dancing leotard. Dad took pics at class, which you may see if you care to visit my new blog, which I am about to start in two minutes: Irish Step Confidential. This blog by the way is the beginning of a new book about the Irish step dancing life in America, due out from University Press of New England in 2012 or so. Mind you, it's due in January and I'm just starting (can we do a group "gulp?") Expect that at some point soon, activity will diminish on this blog and pick up on that one... I'll keep you posted. I haven't been talking about it because I couldn't bear not having started it... but... the blog begins now. (Don't rush; I'm not there yet.)

In the meantime: The Lindsays tonight at the gazebo in Chatham, folking the Cape with Irish music, special guest artist acoustic upright bass player Sean Farias. Free! Bring a lawn chair and bugspray.

Unknown said…
Thank you for your kind words... anytime I can be compared to a Muppet, I know it's going to be a good day:) Oh man, I didn't know that Soul Fry was taking her first step dance lesson!!! That's a tough one. We loved having you at the concert and hope to play with you again soon. Seriously, wasn't it worth it just for the steak tips?
July 21, 2010 at 10:17:00 AM EDT