Notes from a Town Full of Turkeys 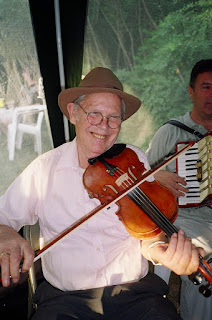 The summer bug has bitten, and I apologize but the writer in me is on vacation. This is going to be just another newsy Lindsay message. This morning brings you: happy birthdays, recording updates, gig news, scary bug spray, a bike ride with turkeys, and O'Leary for Congress!

We love Brendan, and have included three of his tunes on our upcoming CD, From the Green to the Blue. Great news on that front: I do believe that on Monday, we finished all of the recording, and now engineer Rob Pemberton is busy mixing the tracks. Hopefully in a week or so, he'll be done and we'll be ready for mastering. Then, it's off to Nimbit for CD duplication, and we're expecting a completed CD by late August/early September. Hooray! It's been a long time coming. Design Diva is doing the CD cover and it is so gorgeous; just can't wait to share it with you.

Speaking of summer bugs, after tomorrow, we won't have any. In response to the EEE threat, the state of Massachusetts is about to spray for mosquitos all over Plymouth County, and, well, I did a little reading up on this and it looks like things aren't looking good for the backyard organic gardens and pretty much any bug that leaves its windows open or its air conditioner on tomorrow night after 8. We're instructing all of our bugs to keep the windows closed, but I don't think our bugs have learned English yet. So... well... sayonara, our winged buddies. We're sad.

On the gig front, we're gearing up for the next big Lindsays show at the Church of the Pilgrimage in Plymouth on Tuesday, August 24 at 8:00. Free concert, it's our annual show, and we're looking forward to it. As always, there will be special guests, including Sean Farias, a fabulous bass player from Marlborough who played on several tracks on our CD.

Other gig news: On Sunday, I had the distinct pleasure of playing with Stage Door Canteen as the opening act for the Boston Pops, and I admit, it was a great thrill to stand out in front of the band and do a baritone sax solo on a shiny new borrowed horn, for an audience of some 3,000! Fun!

The fun continues on Friday, when I join Debbie and Friends for a kid's show at Heritage Plantation in Sandwich for their Family Fun Fridays. The next night, Steve will play with a Cape Cod crowd of Irish traddies at the Scituate Beach Club... Stuart Peak, Clayton March, Rose Clancy, and a few others.

On the personal front, Soul Mama is still up at the crack of dawn to cycle with Design Diva, and this morning we cycled past a meadow full of wild turkey families (such cute little babies!) and one gorgeous deer, glowing amber in the sunrise. Worth the lack of sleep, just for the view.

And finally, I just found out about Rob O'Leary, Democrat for US Congress, thanks to that pesky vehicle, direct mail. But this letter I opened, and I admit that despite my slightly pathetic level of political awareness, I like what he stands for and his grassroots campaign appeals to me. I'm in. Check him out at www.olearyforcongress.com.

I'm getting political? It must be good. Or maybe it's the heat.
Email Post