The Little Red Hen, The Sequel 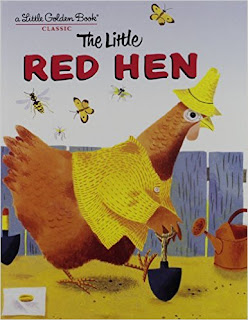 There once was an author called The Little Red Hen. After the publication of a very successful first book, the Little Red Hen and her editor Tonto spent several years experimenting with a number of follow-up book ideas and a couple of failed overtures to literary agents. In one rejection letter, an agent told the Little Red Hen that if she didn't have a million followers on social media, she can forget getting a publisher to even look at her.

So the Little Red Hen tacked. (She was also a very able seaman.)

To boost her presence on social media, she hired a videographer and produced a series of videos to share on sites like Twitter, Facebook, Instagram, and other outlets she didn’t even read or have accounts for yet. Her readership did not exactly skyrocket immediately, but it was a start. People seemed to like them. She polled her readers and, with Tonto, set plans in motion to create a second batch of videos on topics her readers suggested.

LRH met with a new producer and worked with Tonto to craft video objectives, score original music, and other important preproduction tasks. But then, just as shooting was about to begin, that project stalled unexpectedly due to a cancellation, divine intervention, and a ridiculously high project estimate. The videos would need to give LRH a lot of traction to justify the expense… and to get traction, someone would need to spend a lot of time on social media promoting the heck out of the videos. Ew.

“Not I,” said the noisy yellow duck.

So, the Little Red Hen and Tonto tacked again. Well, actually they simply pulled down the sails and drifted peaceably near the equator, trailing their fingers along behind them in the warm sea while contemplating their futures and chatting idly about how to remove salt stains from leather shoes.

The Little Red Hen decided that maybe the real problem was that she wasn’t passionate enough about her ideas so far. Tonto thought that the topic wasn’t the issue, and that perhaps LRH was so focused on the product—scoring another big hit—that it was impeding her process. Tonto, who was a gifted Freudian psychoanalyst as well as crack editor, offered her diagnosis: Debilitating performance anxiety. A focus on the product, not the process, had created excessive anxiety and cloudy thinking. The patient is left feeling incomplete. Anxious. Impotent. Without an inspiring book topic.

The tragedy of untimely death is not the sadness of a failure to live but rather the resounding echo of unfulfilled promise. Parallel tragedy occurs when fulfillment is solely projected on the goal, and one misses the satisfaction gifted to us daily when we remember to enjoy the process of reaching toward it.

Readers, when the Little Red Hen was not planting seeds, cutting wheat, baking bread, or shopping for black and white oxford loafers at Cole Haan, she loved to write. Excuse me; not “loved.” Loves. Writing makes her feel alive. Fulfilled. She doesn't really care about social media. And yes, she likes books. She does. But books are the product. Writing is the practice. And the practice is what will make her feel complete. So says Tonto.

In a rare moment of New Year’s Day clarity, Tonto asked the Little Red Hen, “How about if you just write, and [expletive] everything else? The fulfillment of the writing life may be something so simple as doing it every day. Yes, the published work is the crowning achievement, and we’ll get to that… but the amulet to ward off writer’s malaise: daily practice. Everything comes back to this. So simple.”

She did, however, send Tonto some really nice soap in the shape of Buddha’s head. Stop by. It smells great; she’s keeping it in the guest bathroom.

Anonymous said…
See "Yes please": Treat your career like a bad boyfriend (ignore it, don't try too hard). Your passion/creativity is a "really warm Hispanic woman who has a beautiful laugh and loves to hug. If you are even a little bit nice to her she will make you feel great and maybe cook you delicious food ." Love this post!
January 10, 2016 at 1:14:00 PM EST