We Don't Need Another Rockstar 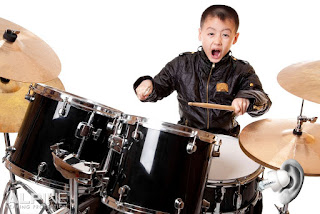 A parent wrote a kind letter to me a couple weeks ago, telling me just how much her little guy has been enjoying music class. He comes home at night singing the songs he learned in school, and now, she tells me, "He wants to be a rock star!" And then the inevitable question... "Where can I get him some music lessons?"

Great! I LOVE IT!

I started teaching music because I want more children to experience the joy of musicmaking, and to grow up into adults for whom music is a source of joy in their lives. But I don't want to farm rock stars. Don't you read the stuff some of those stars and starlets say on Twitter?

The real problem is that striving for rock star status is exactly what gets in the way for so many aspiring musicians... and dare I say, for just about every artist and writer I know. My heart breaks every time I think of my many, many friends who have stopped performing, bands that have broken up, painters who have stopped painting, writers who stopped writing, because they had a broken dream. They came to a point where they didn't feel it was worth it anymore; they weren't getting any traction. Fame is elusive.

In all of these cases, they lost sight of the love of the doing. They became an artist because of how much they loved making their art, but somehow that got obscured by the pursuit of making a masterpiece. And when the masterpiece didn't come, they forgot about the "making art" part. We want to make a hit; we want our work to have enormously broad reach.... and sometimes this reach gets mistaken for self-worth, and when the reach doesn't come, depression descends. I have stories upon stories of artist-friends who have emerged from depression when they realized they weren't going to be famous. They all have stories of having reconciled themselves to it, and have found ways to live happily... but guess what? Most of them are no longer making their art, even locally.

So, with this in mind, Mom: I have an idea! Lessons are great, but also expensive, and for kids who are 5 and 6 years old, they are usually not the same as having fun playing music. How about if, instead of ever mentioning "rock star" to your wee dude, just keep letting him make music at home. Take him to local concerts, where the guy on stage with the bright red electric guitar and white hair is the same guy that fills gas tanks out by the airport. Get tickets to the local Philharmonic, where some of the music teachers in the schools perform. Go see early shows at kid-friendly venues in town, where regular folks in regular clothes are jamming out and having fun, with no microphones at all. Go see the high school musicals every year. They're really good!

And who knows, maybe The Dude might turn out to be a rock star some day after all. But if not, he'll always have the music. That's the important part.