Song for Our Father

I wrote this on 9/29/2019. Things have changed since then, but it was a beautiful moment I wanted to share. So, hello! Please let me know if you are still out there!

My Dad died a month ago, and I stopped writing. It’s hard to write about grief. Things fell apart and my urge to write disappeared with it. I don’t even remember any more what those last couple of weeks felt like, except frustration that every time I turned around, someone needed something, and I didn’t much feel like doing anything except exactly what I had to do: laundry, ordering takeout, doing errands for dying people, and trying not to get mad at everyone. 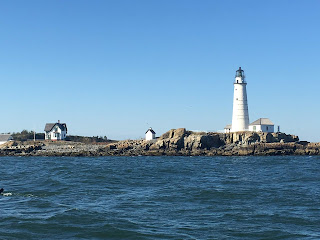 But yesterday, we spread my Dad’s ashes into Boston Harbor. A chapter closed but a heart opened. Interment would be closure, except it’s the writer’s job to open it back up. It’s what writers do. We dig, we disturb, we exhume and poke around among the bones looking for meaning. Please stay with me a moment. Don’t go.
Boston Harbor is beautiful. It’s full of islands, and every island is full of history. That one held Italian prisoners of war. That one held Irish immigrant arrivals that were too sick to touch the soil after having survived three weeks crossing the cold, roiling Atlantic to escape famine and death. That one holds a war fort built in the Civil War. That one has the slowest snack bar on the planet. A small family shuffled along the edge of one island, the shore dark brown with sand and small rocks stained by centuries of pollution. That’s how some people spend their weekends. But who cleans their house? Who does their laundry? How do they manage an afternoon off? Let’s not even talk about this right now.

We had left the dock in Quincy and slowly made our way out the Fore River out of Quincy, past Weymouth, past Hull. The warm September sun glistened on choppy waves. The breeze was light and a few boats passed by returning from a leisurely day at sea. People smiled, waved. I’m not sure we waved back.
I was terrified. The ocean scares me and I’m a writer. I have a very active imagination. Observe:
What was going to happen as soon as we passed out of the river into the open water? Would the waves suddenly toss our little overloaded boat? Our captain is a seasoned recreational fisherman who said he goes out in all weather, but he had never had eight people on his little boat, and we are not small people. Would we capsize? If we did, could I make it to shore? Would we be able to get a lifejacket on my sister with Alzheimer’s? On my brother, who’d just had his third stroke? Who would call to tell Liam’s babysitter that Mommy, Daddy, and Sister weren’t coming home? Who would he live with then? Would they love him enough?

And what about the ashes? Were they in a plastic bag inside that red faux-leather cardboard box? Who would open the bag? Couldn’t we just toss the bag in, and then I’d swear off Dunkin Donuts Styrofoam for a few weeks to balance out my plastic contribution to the universe? If we just threw in the ashes, would the dust come up in our faces? How would we react? What would it feel like? Could we turn back now?
This was how I spent the first 45 minutes of our sun-washed journey in the warm September sun.
Then, we got to Boston Light. It is surely one of the most beautiful spots in New England.
There was no open sea, no giant waves—just more light chop—and without notice my fear was gone. Boston Harbor Light was built in 1783 on Little Brewster Island, a rocky outcrop with a white shingled house, an outbuilding, and a tall white lighthouse. Rugged rocks climb jagged from the water, and we are two hundred years back in time.
We were also back 74 years in time, where a young Clem had spent many an afternoon learning to fish with his dad, a wiry young city boy, skin already leathered and blond hair bleached with sun, muscles taut and blue eyes gleaming. I imagine he wore his red flannel shirt and hat, but everything is black and white and a little blurry, and I can’t quite tell. They had launched the boat at Quincy, where the family had just moved to escape the city and raise their three young boys. The smell of bait was in the air, even stronger than the ocean around them, and water sloshed on the floor of the boat. A father and son on a Saturday afternoon excursion.
What a long way this father had come, the son of a Lithuanian immigrant who disappeared when he was not yet 10, leaving the son to help raise his three siblings while the mother, who also had just come from Lithuania, worked nights as a chamber maid in a Boston hotel. Clem Sr. enrolled in the Civil Conservation Corps during the Great Depression, and found himself assigned to build a dam along the Androscoggin River, which cuts through the logging town of Berlin, New Hampshire. It’s there in the off hours, that somehow he met my grandmother, a sullen young local of Norwegian, French, and Swedish stock. The father took him in, and Grandpa, who knew no father, was enchanted. He and Francis married not long after. They settled outside of Dudley Square in Roxbury with all the other immigrants, and soon made their way to a home in Quincy.

And he got himself a boat. He started an auto body shop with his brother. And he had three sons. He taught my father to fish and to hunt, and to repair cars. Together, their favorite destination was Boston Light. My Dad, who mostly told me about his father getting dumped off drunk on the front lawn, had fond memories of those days of fishing with his dad. He had never mentioned them before; his stories mostly focused on his times with his brothers, and little mention of his drunken father. Drunk? My grandpa of the smiling eyes and strong brown shoulders? I remember every wiry hair on his back as I climbed up to jump off those shoulders into a Cape Cod pond fifty years later. I remember that he loved his dog, took me fishing, tended his garden, played cards with me. I remember him boiling beets he had grown and sitting outside at his picnic table sucking the meat out of cooked lobster legs. I remember him playfully teasing my mom, the daughter he never had. But this was not the same man my Dad knew most of the time. Still, a week before my Dad died, that’s the same man he loved best: the child-loving nature boy, and that’s where he wanted to meet his father, as their final meeting place.

How fortunate we were that we could bring Dad back there today. His memories could not tell my ears what his eyes had seen, but their emotional imprint flooded my heart. Out there among the waves and the lighthouse, I was no longer scared. I felt only love. Love for my Dad, for my grandfather, and for my family. Deep gratitude descended for the family they created, all here in the boat together, just like we were supposed to be—sad but optimistic, sick and confused but not broken, grieving but joyful, tossed but grounded—together. My niece Sam gently sifted his ashes into the sea, and we all tossed sunflowers onto the waves to send him onward. I was overwhelmed with a sense of peace. We are all here. Dad is here. Grandpa is here. Maybe our lost brother Paul is here. And definitely God is here.

He had made it. We had brought him back, and we were all together, his children and grandchildren. Together and happy to be so.

Home at last. The green rocked beneath us and the grey cloud of ashes blossomed like a cloud beneath the waves. “He’s all around us now,” Captain Bob said. The dust of my father’s existence embraced us and we sat for a moment to watch the sunflowers float into the distance. He had lived. He had mattered. And because he had lived, this beautiful moment lived, too.

After a few moments, Captain Bob softly kicked the motor into gear, and without a word, we putted slowly past Boston Light. Two seagulls approached from behind, one big, one small. They flew along with us for a moment, directly above us, nothing our presence but never looking down, wings spread, gliding. We looked up and watched. A minute later, they were gone without a sound.

Home. Free. Not to be seen again, but remembered for one last graceful visit, a mile offshore, gliding peacefully and then sailing off with the wind above the rocking, glistening waves.
-Susan Gedutis Lindsay, September 29, 2019