December Instructions from Nero: What to Do While Rome Burns 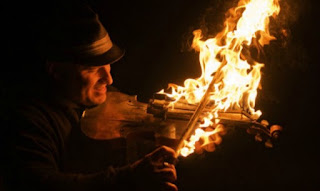 Walter loves to lie in bed and listen to a storm, but he can no longer hear the rain. He can hear music, and so he comes out for it. He takes his dinner at the bar and chats at length with a couple he just met. Friends can be found anywhere. His ears may forsake him, but his eyes are open.

Sean lives on the street with his bottle, but over the years a very special lady took him in when the whole world forsook. She yielded last week, and he lost his sun, moon, and stars. He donned white cotton marching gloves with his suit jacket and boating hat, and went to the church to lay seashells on the altar beside her ashes.

Sarah’s husband suddenly left her just as her children were about to launch. No real explanation. The future was set and then it dissolved, but she is crafting a new future, going places she’d never thought she’d be beside friends she never expected she’d have. The husband was a doctor. The new boyfriend keeps a gun beside his bed. Just in case, he says. He has good strong hugs, and he cares. She’s more open now. It’s the new Sarah.

Mark is so lonely, so lonely. He sits in a hospital bed, two months on, with nary a visitor and only a rare call. So he walks. Every ten minutes, he rises to his walker and he goes. Mind over matter, he said. The days are long, and he fills them with shuffling footsteps.

Geoff has always kept his young kids away from his closet full of expensive instruments. He recently landed his dream job. Then, a headache. A brain tumor. He put his instruments on consignment in Nashville. "I’m gonna die," he says. "So I bought a dobro and I’m going to kick ass on that thing before I go."

Maria left Cape Breton when she was 19. In Boston, she married a man not because she loved him but because she wanted her baby to know its father. It was the right thing to do. She tells him every day she’s gonna leave him. He loves Trump. She hates him. He reaches for her body and she asks him, “Are you CRAZY?” She picks up her fiddle and plays it like she’s on fire. Maybe she is.

Maybe we all are. We may as well fiddle accordingly.