Jesus, Her Girlfriends, and the Compost Pile: Not On Bread Alone 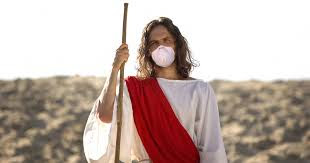 A music teacher friend recently wrote a beautiful blog about how this enforced isolation is giving him time away to "finally connect to someone with whom I don't often get the chance: myself." I like his thinking. Perhaps we can look at this terrifying quarantine time as an opportunity to walk in the wilderness for 40 days and 40 nights, just like that peace-loving, son-of-a-carpenter, sandal-wearing hippie freak from the Good Book. Not a bad idea, but the only thing is, how'd that work out for our hero?

See, like us, the Hippie Dude shut the doors to the offensive outside world, as commanded by His Authority Above, and did pretty well in isolation for a while. He finally went through the mail pile that's been mounting up for a few months, paid a few bills, reorganized the kitchen cabinets, raked last fall's leaves since he was too busy saving souls last fall to actually do it, maybe cleaned up the dog's poop along the perimeter of the yard (with gloves, of course), wondered if he'd finally learn to improvise a meaningful solo over "Ornithology" at 220 BPM, and set up elaborate plans to start eating healthy and exercising next Monday.

But then he ran out of bread. That stinks, and BJ's shelves were empty last time he went, and their bread sucks anyway. As he dusted off the bread machine and brought it up from the Infernal Underworld, the shadowed fingers of evil began to creep in. The first to break the peace of his #staythefuckhome quarantine (other than the resistant individuals waiting in line for ice cream yesterday) was the Prince of Darkness, Mephistopheles, He Who Shall Not Be Named, Beelzebub, Diabolus, or Person Who Complains That The Homemade Bread You Made Is Bland.

Enter Angel of the Bottomless Pit. He commands to our hippie hero: “If you are the Son of God, tell these stones to become bread.” The Prince of Peace looks down at the loaf he just made, shrugs, and is at a loss for words, because as it turns out, just the opposite happened already. The bread that the Chosen One made has already become stone, because it's kind of awful and no one around here will actually eat it.

And there is where Satan finds his entry. Hissing, he offers Hippie Boy an option. "Take that bread to the highest point of the kingdom (AKA, Soul Fry's bedroom window), and cast it down, and at least if the dog eats it, then you shall know that at least one living being in quarantine actually worships you for your selfless acts of service."

Hippie Sunflower Boy follows him up the stairs, breathes in deeply to make sure that s/he's just woefully out of shape and not actually showing respiratory symptoms of COVID-19, and looks upon the kingdom below. In his vast .27 acre garden, He sees His past, His present, and His future laid out before him:  two tennis balls in fluorescent orange and green, several half-eaten stuffed dog toys with the squeakers ripped out, two heads of cabbage the dog extracted from the compost pile, no visible poop because that was already picked up and tossed over the fence yesterday, the neighbor's trampoline, and piles of construction materials salvaged from every job Joseph the Carpenter has worked on over the last twelve years.  (Pipe down, neighbors, we're saving that for the shed.)

"All this could be yours if you would only bow down and worship me," said the Son of Perdition. That's right about when Daughter of Man, Emmanuette, Princess of Peace heard the chorus of angels below. "Oop, that's my timer!!!! Gotta run!!!!!! The cookies are ready!!!!!"

And with that, S/He escapes the Hound of Hell and returns to Earth to walk among the unanointed. The devil shakes and his head and is totally like, "Jesus Christ, why do I even bother." Pissed off, he storms off in his Camaro, and angels come to join Jesusina in a FaceTime call to swap parenting stories, share bread machine recipes, and evaluate patterns for surgical masks you can make at home.

So ends our reading of the word.
Email Post