Together at Home, in Spirit: Where Science Ends and Music Begins 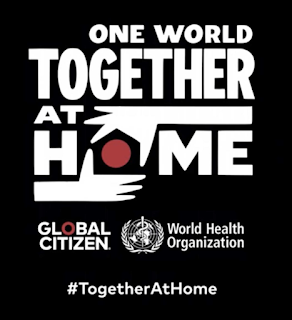 You'll never know the meaning of alone until you drop your iPhone in the toilet.

I don't know how we found last night's "One World: Together at Home" show in support of our health care workers, the World Health Organization, and Global Citizen (which I've never heard of; I'm a sad case sometimes)—but by God I was transfixed. It helped that my phone was buried in a bag of jasmine rice: no distraction.

We have been having connectivity problems, but somehow connection was restored right on time for 8:00. Someone whose name I will not mention had just spent a half hour swearing at the television while they tried to get our new cable working to no avail, only to return to the digital antenna system we put in place a couple months ago. First world problems. As soon as our TV was reconnected, we started flipping the channels when we stopped at an earnest-looking brunette's bright eyes in front of a microphone. This looked interesting, we thought. No idea who it was. Oh. Wait that's Lady Gaga. That woman is a metamorphical GENIUS.

She sang an old standard, hearkening the Broadway chest voice of Ethel Merman, and we were hooked. I didn't move for two hours (in the way that a mother "doesn't move," i.e., get up to serve and deliver dinner, refill apple juice, assist with potty, look at the thing the teen found upstairs while cleaning her room...) Ok, so maybe I didn't sit down for the entire thing, but I pretty much caught it all. So many warm words, so much love and caring, but also, for the trained social critic and armchair music critic: so much to analyze. Who went live.... Who used backing tracks... Who definitely was NOT. JUST. SINGING. THAT. LIVE. Who is using genuine live technology to play together. Who still has it and who doesn't sound so good live anymore. Who seemed authentic and honest and who seemed like they might have been faking that tear-filled voice.

And speaking of who ... WHO. Who stood up for the WHO????? Jeez, well,  as it turns out, just about everyone, with one stunning exception. And who stands up for our health care workers? Everyone. (By the way, does anyone know where Betsy DeVos is? No? Ok, just checking.) So humbling to hear stories of generous people who have risked their own health and safety to care for others: not just our health care workers, but also the people who are serving meals to the homeless, singing and dancing in the front yards of Isolation Row, creating education to stimulate the kids at home, hanging rainbow posters in their windows, and doing things with beakers and eye droppers and other machines to protect us from this ever happening again. Holy crap. A lot of us aren't doing any of that. We're all mostly just trying to get through the day.

Getting through the day sure does gets in the way of all that stuff that you feel you are supposed to be doing.

Someone talked about how important it is to patch up bad feelings and call that person you love and tell them so. Wow, celebrities are now telling us to do that? Oh, and thank you, woman of one name that begins with M who I have never seen before, and also Charlie Baker. And thank you to all the famous, rich, and pretty people who said nice things. But more thank yous to the health care workers who danced in scrubs, and the ones doling out bags at food pantries, and the people taking temperatures in Africa somewhere. (And Chickie Celli.) Oh, and Laura Bush and Michelle Obama together. TOGETHER. Ahem. And who can bear to face the statistics of the disproportionate effects of this virus on our African American population. Curse you, President.

A lot of us are just staying home, not doing anything worthy of headlines but helping nonetheless. Many of us are someone's lifeline right now, are we not? I know a girl who is struggling and alone, but just the thought of her is keeping her mother alive—a mother who is struggling even more than she is. That girl is saving a life merely by existing. And I know another girl who had to seek therapy this week because of someone else's stranglehold on her lifeline. She also is saving a life simply by existing. And I know many people for whom music is #1 on their gratitude list; those people who are making music online in live concerts are helping other people cope. Again, when there is nowhere to turn, we turn to music.

Survival of the spirit: This is where science ends and music begins.

Global Citizen raised $128 million last night. If you missed it, you can watch it here, which links you to the ongoing concert; last night's two-hour special was "curated" by Lady Gaga, Stephen Colbert, and the two Jimmies.