One unintended benefit of the Black Lives Matter movement is the opportunity for education—or, in other words, the chance for otherwise "woke" white people to realize their utter ignorance and stupidity. Mm-hm. That would be me. 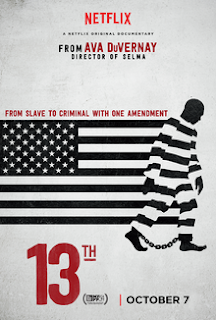 Watch 13 on Netflix. It was an education and a half. 13 lays out in stark and horrifying detail the systematic racism of the U. S. prison system and the way that the 13th amendment, passed in 1865, protects citizens from forced labor except as punishment for a crime—the bleeding loophole. Except as punishment for a crime. Missing your slaves? Put 'em in jail; put 'em to work. Millions of men and women over time criminalized for misdemeanors. Or when innocent.
There is so much to write and to say, but the film says more than any white girl drinking coffee on her brick patio has any right to. What this white girl needs to do, more than anything, is offer an embarrassing correction on a previous well-intentioned essay about why I teach the blues. In Teaching Blues is Teaching America, Yesterday and Today, I wrote about how teaching children to play blues music is my own kind of activism. That part is correct. But the way I described it? Inappropriate and unintentionally white-washed. "When people left the dusty Southern byways in the 1920s, 1930s, and 1940s for the bustling Chicago streets," I wrote, wearing my tweed jacket with leather elbow patches and smoking my pipe, "the music moved from the home to the club, and audiences got bigger." All that is true, really.
But why did they leave? As 13 reminds us, they were fleeing terror. Black boys, men, women, and children were being terrorized for no other cause than being black. Hung from trees. Incarcerated. Dragged behind cars. Beaten with clubs. Leaving the South following Reconstruction and Jim Crow was the Great Migration—I've written about it a million times, taught about in college classrooms, helped other faculty put it eloquently into their books and online classes, worded just like the way the History Channel has done it here: "The Great Migration was the relocation of more than 6 million African Americans from the rural South to the cities of the North, Midwest and West from about 1916 to 1970. Driven from their homes by unsatisfactory economic opportunities and harsh segregationist laws, many blacks headed north, where they took advantage of the need for industrial workers that arose during the First World War."
No, not economic opportunity. They were fleeing domestic terrorists, the KKK, and running for their lives.
Running
to
Save.
Their.
#$(*@#$
Lives.
Good intention, sure. That essay I wrote about the blues was intended for the parents of this town, by and large a middle class, mostly comfortable white crowd—and this is what can happen when you try to dull the edges of reality to protect your readership from insult: You can miss the whole point. And sadly, this is undoubtedly the same reason that a woke reader such as me'self could have missed the point in all those books I've read about the history of the blues and of American music over the years: Those writers were mostly white too, writing academic books. They had dulled their swords, too, or their editors had dulled their swords for them—because they were selling history to a largely white student body.
One of my friends, author and speaker Ellen Lubin Sherman, wrote to me a month or so ago compelling me to tell the whole truth in my writing. She sent me an interview with Jamaica Kincaid that has echoed in my mind nearly every time I sand the edges off a prickly first draft since then. Jamaica Kincaid, a black writer, says this: "I could never write with a reader in mind. I tell my students that all the time. If I want to do anything with people in mind, I would become Mitt Romney, my favorite person to say mean things about."  More Jamaica, less Mitt, please.
They say that the pen is mightier than the sword, but that's only if you commit yourself to writing with a sharpened pencil.
Email Post
Labels: Learning Music Online Life of a Writer Love Is Love Music Education