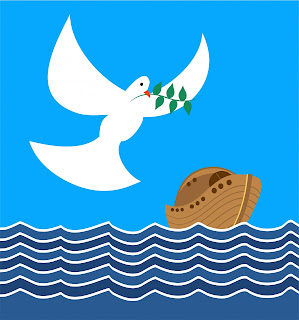 Good morning! This is another reflection written for today's devotional for the Church of the Pilgrimage, Plymouth. Old Testament this time... you know... the other set of impossible rules.
How magical the early mornings in June, as we approach our longest day. The sun precedes even restless me. It rises on fire, a blinding beacon amid the maples. I, also, rise on fire. I burst from from slumber to run, to think, to say, to serve, to share. The sun—it rises not even to shine; it rises only to rise. Nay, the sun stands still, spinning and burning in place. It is we who turn each morning to meet it.
There was a song we sang at summer camp:
Rise and shine
and give God your glory, glory
Rise and shine
and give God your glory, glory
Rise! and! shine! and!
Give God your glory, glory
Children of the Lord
It was a song about Noah. Noah had been a good man even when the people around him had descended into chaos and evil. God beheld the corruption of the earth, and resolved to wipe it clean. Ah, but he spared Noah, kind Noah and his family. Noah, as the song goes, "built him an arky arky, made it out of hickory barky barky," gathered the last of the animals before they went extinct, grabbed his wife and kids, and off they sailed. That sounds really good right about now.
We are Noah. See, we aren't half bad, really, and it feels like we're at one dark end of an ever-spinning cycle of time. Maybe we feel we are among the few left clawing for peace in a world gone mad. Greed, corruption, disease, injustice: I've only been around half a century, but I'm thinking we've reached the chapter in the Book where things are getting nasty again. Isn't it about time to wipe away evil and head off into the waves for a few months?
We can't.
Cruise ships are docked. Airplanes are grounded. We're stuck at home. God made rainbows as a promise he'd never send a flood again, but here comes the rain. The waters are rising, only this time no one is going to pluck us away. We have only our own meager ark, but it is strong. We build it every day, each plank hand-hewn from solid compassion, cracks sealed tight with pitch of hopeful prayer. We dock at night, sleep out the storm. The sun rises, the tide recedes, we get back to work, the floods come again. We sleep. One day, the dove returns, olive branch in tow. Each day is new; some days are newer than others, some sunrises are especially bright.
The sun also rises in the final verse of the old camp song:
The sun came out, and dried up the land-y, land-y
Sun, came out, and dried up the land-y, land-y
Ev!-ery! Thing! Was!
Fine and Dandy, Dandy
Children of the Lord.
Everything is not fine and dandy, at least not now—but when we live in compassion, we build our ark around us each day, and the sun always rises to remind us that we can start anew, give glory, build another ark, keep fighting the good fight . . . . Children of the Lord.
If you don’t remember the song, here’s a children’s video that sounds like the one we learned in summer camp:
https://www.youtube.com/watch?v=DSxd9JVE3r4
And if you want to be inspired, here gospel singer Albertina Walker singing the original with unbridled spirit:
Email Post