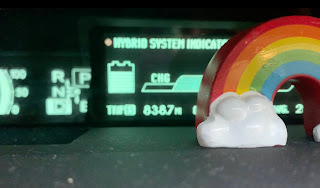 Ok, ok. That was an exaggeration, but you know... I have a PR background and know the power of a headline blah blah blah.

Teaching has begun! I'm in a tent! Also, more explorations of grief this week. And also hugs.

I've been making videos about it, storytelling through the poems we call videos. And then not sharing, concerned they are too personal, too honest, too too. Then I had a talk with a custodian in the building where I work. He used to do standup comedy. Then he stopped, because if he messed up a joke, he said he'd spend the next three weeks staring at the ceiling at night worried about it. Then I thought of Robin Williams. Anthony Bourdain. Other funny people who lived large. Vulnerability ain't easy. But truth matters. God, are we living THAT right now.

With that, and in honor of our awesome custodian who set up my tent and brought out the chairs and music stands on Custodian Appreciation Day, here are three vids I'm putting out there for the world to hate. Or love.

Happy Weekend! Lovehearts, unicorns, and rainbows to you.

First one, on grief and getting over it.  The most terrifying to post, but a friend told me this is my best one yet. Um... ok.

Second one, on how awesome it is to teach again, even though tents are weird.

Third one, I miss hugs.