Gosh a full week since the last essay; things have changed. A lot is happening. Big issues. Family. Life. How is sister Marian? How is brother David? Challenging, both. Bad. There. I said it. Marian: We're moving to palliative care now. Did I expect it to come so quickly? No. But COVID isolation has wreaked havoc. And as for David: You'll have to just trust me on that one.

Alzheimer's is a monster. It is a monster for the person locked inside, who knows that something very very wrong is going on but can't quite explain all of it and therefore is terrified, and it is a monster for the caregivers, the ones who love that person and who always want to do more, but struggle because it's really freaking hard and they feel they can't. I spoke with a social worker at my sister's doctor's office about a month ago, and she said that's the thing about Alzheimer's. Not a single family she works with doesn't express some degree of guilt. I could do more, we think. I could be better. I could take them in. No, I couldn't. I could call them more often. I could visit more. Me: With kids and life and everything else, I forget. It's terrible, I'm telling you. Am I keeping up with all her bills and finances and managing her house? Um... mostly. Not really. Am I keeping up with my own bills and finances and kids and managing my own house and ... um... mostly. Not really.

Strange and peculiar animal, this. 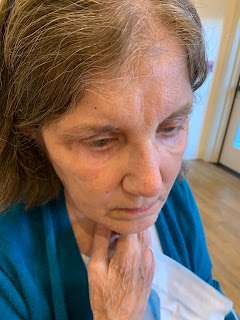 How is Marian? She weeps all day. She wanders. Stares into space. She can no longer put together a sentence. She bursts out in strings of syllables sometimes then claps her hands loudly because she likes the sound. She wants out. I took her to the doctor in Boston last weekend and pretty much from the moment she got into the car until seven hours later when we got back to her place, she begged me in her strange language to take her home with me. Ten minutes after I dropped her off, the nursing staff called. Had she eaten something bad? She is throwing up. No, I said. That is anxiety and grief. Intense, painful gut-wrenching anxiety and grief.

What can I do? She can no longer put together a sentence and can say few complete words. But she knows she wants to live with us, and she can even babysit, she said. She won't be much work. Note: She can no longer toilet herself. She can no longer take her own pills. She stares at her dinner plate and wonders what it's all about and is not sure what to do about it. She needs help walking. And she doesn't see it. She can't understand, and five minutes after we laughed our heads off on the beach because she said a string of syllables that included "stinky winky," she became angry. Well, I laughed to the point of dropping my phone, as I was trying to capture the moment, the beauty, the seagulls, the waves, the syllables in the back seat. My arms went weak. She laughed with me, not sure of what I was laughing about, then went into a string of strong fake laughing. HA. HA. HA. HAAAAA, she said. Then she got mad. "I'm angry," she said. "I want you to take me out of there." She entrusted her life to me by making me her primary caregiver, her power of attorney, her executor. Her MVP. And what am I doing? Putting her in a home and forgetting to call every day. Not wanting to be the one who has to do the wiping.

But I'm not forgetting. That dear sister of mine is on my mind almost constantly. But my husband and my brother and my kids are too, and other things.

Guilt? Immense. But: I know my limits. She can't walk in a direction anymore. She can't do stairs. She stands at the toilet and knows she has to do something, but isn't sure how to sit down. She stands at the edge of a black rug and stares. She won't step on it lest she fall into that deep black abyss. She toilets; I wash her hands by rubbing soap from the hospital dispenser. She doesn't know what to do. I pull her hands to the cool water. It sends tingles or sparks or needles through her body and she exclaims, "COLD!!!" and rips her hands back. When you grasp her wrist to move it so you can undo her seatbelt, she yells, "OUCH!" You barely held it at all. The beach that she walked on for hours daily through the dead of winter for sixty years: she couldn't step out of the car for more than 10 seconds that day. "It's FREEZING!!!" Her senses are on edge.

So are mine. People ask repeatedly, "Can't you just put her in her own house?" or "Can't she just live with you?" They don't understand and it is a terrible thing to ask a person. They don't know the expense, they don't think through the complications of managing round the clock staff, they don't think about managing the medications and the administration and the insurance and the locks on the doors and who will give the baths and will she even like it there and what if she wanders off into the darkness some night and is found in the woods near the nuclear plant three days later cold and starving and they don't think about the COVID that may or may not come into the house with the staff, that then might come into your own house, that might deprive your children of their parents—children with their whole lives ahead of them. What if it snows and she loses power down there and the pipes freeze? It happens every year. What if staff can't get there? It's a lot to think about. Catastrophic thinking? Yes. Completely possible scenarios? Absolutely.

So, we accept that we are imperfect. We see our limits. We give ourselves grace that we almost always make thoughtful decisions and that probably this is the right thing. We say that this is what entrusting her future and her health and her safety to me means. She is in a wonderful place with people who care. They are not family, though. But a global pandemic that caused such intense isolation, loneliness, and rapid decline is not my fault. It's not. But I'm telling you: Guilt is real. Don't console me; I don't need it. I'm fine. But this is not an easy road, not for my sister, not for her daughter, not for me, and not for my family.

We continue; we persevere, because it's what we do. And we do the best we can. We continue to love, and what else matters?  I'll tell you what. This. This right here matters:

Rosalee said…
Dear Susan . . . Than you for sharing in a way that helps us all feel connected and acknowledges that life is not always easy. my sister Ella suffered with Alzheimers for about 5 years. I will never forget our visits perhaps twice a year as she lived in Oklahoma. Sometimes she knew us - sometimes not -Her husband Floyd spent hours each day in the Memory Loss with her - always teasing and bringing smiles to Ella and the staff. She always remembered songs . . . and I have a recording of her singing with Floyd - even now hearing it brings me closer to her. Her children visited often as well . . . It is so important to remember that being able to care for one another is one of the most beautiful gifts of life. I'll send you a copy of a narrative poem I wrote after her death.

Thank you for sharing your songs, your words YOU with us.