Kiss Me, I'm Not Irish 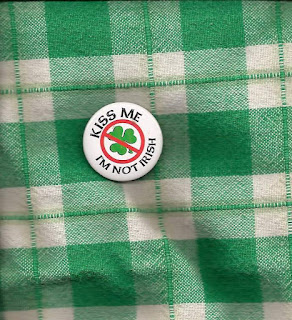 Sue's column, in the March issue of the Boston Irish Reporter

I have a badge that I consider wearing to my St. Patrick’s Day gigs every year. It says, “Kiss Me, I’m Not Irish.” I love it for so many reasons. The most obvious is its irony: it’s so contrary to that typical St. Pat’s slogan that causes such cringing among you folks who are still Irish the other 364 days.

But the pin works for me, in a way. Of Lithuanian and Italian descent, I’m Irish only by design—by marriage and by music. If you didn’t know any better, you might assume I’m Irish: I play Irish music, write about Irish music and culture, and have Celtic knots embroidered, carved, painted, and scribbled in uncountable conspicuous places in our little Plymouth home. Shamrock mugs, potholders, and tea towels fill the kitchen presses, and our CD rack has more Irish recordings than you’d have time to listen to by next St. Patrick’s Day. Still: not Irish.

My love affair with Ireland began in 1991, when I ended up in Thurles, Co. Tipperary by accident, ran out of money…and stayed a while. For that, I blame the music. Specifically, it was not the music itself, but the attitude toward the music. As a freshly graduated music major at that time, I didn’t really get Irish traditional music just yet. It all sounded the same to me but I liked the idea of people playing music together informally, not even on stage. What I liked best, actually, was the late-night singing sessions, and even more, the fact that people sang at all. I was particularly intrigued that men sang. That was new to me.

What also intrigued me was the welcoming of amateurs. Thus far, I’d only encountered art music: jazz and classical, where the music is furthered by the masters—and not such an easy place to be if you’re content to be “just alright.” In those musical worlds, very seldom do you have a chance to sit beside the masters without paying them $75 an hour for the right to do so.

Not so with Irish music. This is folk music—as much a part of people’s lives in Thurles as bringing in the lambs, greyhound racing, placing bets at Seannie Dooley’s, and having a few pints at the weekend. The typical Irish session in Thurles included musicians of many levels—veterans and rookies, masters and those who hadn’t a note in their head. I was used to jazz, where musicians play specifically to the audience. In Irish sessions, musicians face each other… making music for music’s sake, not the audience’s. (For the most part. Show me a musician who doesn’t play better in a session with an attentive audience, and I’ll give you that 50 pound note I’ve been saving since Ireland switched over the Euro.)

What I also found remarkable about Irish music was that you didn’t have to be at Pavarotti level to be asked for a song. We have a friend whose voice warbles all over the place when he sings about landing “at Kennedy and a big yellow taxi carried me and me bags through the streets and the rain….” yet his buddies ask him for it every time. That Wolfe Tones story is his story: coming to America, where the streets really are not paved with gold… and you can hear the hardship he’s experienced, in his voice when he sings—and that’s what we all love about his rendition.

Somehow, the Irish have done an absolutely brilliant job of marketing the light-hearted, all-fun-all-the-time stereotype. In Dublin, Carroll’s Irish Shops are on prominent in high-rent shopping areas: Grafton Street, Parnell Street, the St. Stephen’s Green shopping center…shops full of shamrocks, sheep slippers, leprechauns dancing on piggies, step dancer dollies, rainbows and pots of gold. It was this Ireland that I expected when I landed there. My encounters with the Irish had really been with the Boston Irish—I had an idea that they were very Catholic, a bit raucous, and wise guys who liked to tease.

That wasn’t quite what I found when I got to Ireland, though. After just being there a few days, I huddled in the corner of a small pub on a pay phone, trying to describe to my father on Cape Cod what the “real” Irish were like… not realizing at all what things were like in a small town in midlands Ireland. To be specific: too naïve to realize that, in this tiny pub in this tiny town, there was no such thing as privacy. No one was looking at me on the phone, but all ears were so craned in my direction that several of the patrons had to see the chiropractor the next day.

What I liked most about the “real” Irish was that all the things I felt like an oddball for believing at home—the reliance on humor in times of misfortune; the acute awareness of current events; the belief that government should indeed take care of its people; that we should care about the plights of the less fortunate; that, yes, the arts have something important to offer; that we should work to live, not live to work; that we should question authority—well, in Ireland, these weren’t “Leftie Liberal” traits: these were Irish traits. (Speaking of questioning authority as an Irish trait, my uncle, a first-generation American Mitchell, recently told me a story of dealing with a English doctor in Boston, back in the 1980s. When my uncle questioned the doctor about a particular “precautionary” surgery the doctor was proposing, the doctor was insulted and told my uncle that he was acting just like “the Kennedys.” It doesn’t take much imagination to see that “Kennedy” here was synonymous with.)

In fact, the real reason I landed in Ireland was that I’d followed the very first “real” Irishman I’d ever met from Spain to Thurles for these traits (witty, sharp, sensitive), thinking, “Why this is the man I’ve always been looking for!” How surprised I was to arrive in Ireland to find that everyone in Ireland was like that.
Today, the center of my husband and my life is one small girl whose first and last names bespeak Irish. It’s our great pride that at 2 1/2, wee Annie Lindsay can sing all the words to “Molly Malone.” No one is surprised to see photos of her bedecked in handmade Arans on a certain stone wall at “home” in Ireland. And I really shouldn’t have been surprised yesterday when she was pedaling her little push bike around the living room, lilting “Doodly-eye-dle-ly, doodly-eye-dle-ly…” over and over. That’s what she hears me singing, as I wander around trying to learn the notes to some new jig. A few weeks ago, she was at a friend’s house and pulled the snare drum off a toy drumset, turned it on its side, began running her hand along the inside of the drum head and tapping the other side with her other hand, bodhrán style. Succesfully indoctrinated! It’s enough to warm the cockles (and mussels) of any Irish person’s heart.

But did I mention I’m not Irish? Let’s get back to that “Kiss Me, I’m Not Irish” pin: I love it for its obvious irony, but I never end up wearing it. I’m afraid people will get the wrong idea. Not about the kissing part (as I said, I am part Italian, after all), but about the “art”—the aforementioned slogan wraps around a shamrock inside a red circle with a line through it: the universal symbol for “NO.” The art looks anti-Irish. And you know, after eight hundred years of struggle, we Irish [wink, wink] don’t joke too much about that.
Email Post
Labels: General Musings