100 Days of Practice, Round 2 Day 24: Bobbie Hanvey and Folding Whistle

Yesterday, I was too busy being important to write or practice. Im-POH-tant, that is.

Mini Me was sick in the morning, so instead of working, I curled up with her under a blanket near the fire and read Irish early reader books out loud. Long stories, not enough pictures for a three year old, but great slang! This way, she'll understand all the relevant turns of phrase that her cousins in Ireland use. Of course, the ones we read yesterday were delivered from the mouths of two small white dogs who can't seem to keep themselves out of the mud puddles on their farm, much to the dismay of their neat-freak mother-owner and grumpy farmer father-owner. Talk about cultural models. I think I've met those farmers and farmers wives.

Then! Last night! I was interviewed by Irish radio personality and photographer extraordinaire Bobbie Hanvey, who was visiting Boston College because that's where he had deposited 19,000 negatives of photos shot in Ireland over the last 30 years or so. Incredible photos and just launched yesterday on Boston College's Web site. Worth taking a look at the link; there's a slideshow. Lots more photos are also on Flickr, but check this out: Bobbie Hanvey Photographic Archives (My sister, who once put my hair in three pigtails, á la Pippy Longstocking Avec Radio Tower, says to herself, "Interviewed MY little sister?")

Here's what BC has to say:

"Hanvey's photographs comprise a comprehensive documentation of people and life in the North of Ireland beginning in the 1970’s through circa 2007. Some photographs feature subjects photographed in various other locations in Ireland. The collection contains portraits, candid images (including weddings and other social events) as well as journalistic images covering public, paramilitary and political activity."

He photographed me, too. Not expecting a photograph, I was wearing a wild-colored hand-me-down shirt from my Dad's 70+ year old wife. And this is how I may go down in the ages. Sigh.

Bobbie Hanvey has presented a program called "The Ramblin’ Man" on a regional radio station in Ulster called Downtown Radio for the last 25 years. Bobbie has an avid interest in the dance hall music of America, especially the McNulty Family. And so, with the help of accordion player Paddy Noonan, they sought me out for interview on their visit to Boston.

It was fun. Sat in a hotel room in Brookline with Bobbie and his partner and talked about See You at the Hall, and also what the Lindsays have been up to musically. We talked all about the dance halls of 1940s Boston, and also general musings about music, culture, and life. I'm sure I said ten silly things that I will later regret. Alas. But, I got to play my new Parks whistle for the first time, and this will be broadcast on Irish radio sometime in February....

Introducing, the Parks Whistle. Folds into three pieces! Durable, and a nice sound! Tuck it in its case, and keep it hidden in your pocketbook! Have it ready just in case an Irish photographer and radio personality asks you to play on his radio show! (Lipstick fits in case, too. Bad for whistle; don't try it at home.) 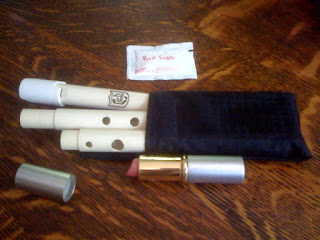 Carey Parks is a nice guy, a great whistle maker, and I bet also a great musician. Lots of really interesting information on his Web site: Website. This whistle sells for $60... not so bad... and it comes quickly. Honestly, I hadn't gotten a chance to play it at all since I ordered it in August, and last night was the first time I played it... on radio, of course. I found it to be incredibly consistent and easy to play--every note came out just like I wanted it to, and in tune. The whistle might be a bit on the loud side for quiet sessions or quiet rooms, but there's a little adjustment collar that fits around the tone hole, and by moving that a bit, you can adjust the volume and the tone. Carey Parks calls that a "tone ring" and says it "allows moving the whistle's sweet spot between octaves." I think of it as a volume slide of sorts. (Thanks, Carey!)

So... back to practicing. Yes, this morning I did. Continued my exploration of the Dave Mallinson tune collection, and found some new gems.

And it was good.
Email Post
Labels: 100 Days of Practice - Round 2 Lindsays News