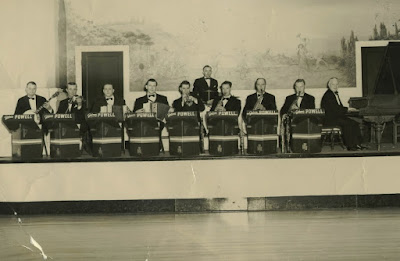 Brace yourself, Martha. The Irish big band is coming.

Tomorrow, at BCM Fest in Cambridge, Mass., the Boston Highlands Ceili Band is feeling ruthlessly enthusiastic about descending upon Boston's unsuspecting Celtic music crowd, decorating its hallowed halls with a bit of brass. It's not exactly storming the castle; it's more like sneaking a smoke on its back steps. Got a light?

Way back in the 1950s, the center of Irish cultural life was Dudley Square, Roxbury, where five dance halls were packed to the rafters three and four nights a week with young Irish immigrants and Irish Americans out to dance, socialize, and, often, meet the love of their lives. The most popular of the dance hall bands was the Johnny Powell Band, a ten-piece band that included instruments such as banjo, fiddle, those boxy and powerful Walters accordions, two or three saxes, sometimes a trumpet, and a rhythm section. Not your traditional Irish dance band of today, but back then, all that power was needed to be heard over the dancing feet of 500+ enthusiastic dancers, and the saxy side helped to meet the varied musical tastes of a mixed Irish and Irish American audience. A little jig, a little reel, a rumba, a two-step, a waltz or two, and maybe, just maybe a little Nat King Cole or Patti Page.

Local record label Copley Records noted the popularity of Powell's band and invited them to record, which they did, in the early 1950s... resulting in a handful of 78s, eventually released on 33 1/3 vinyl as a compilation titled The Folk Dance Music of Ireland with Johnny Powell and his band.

Fiddler Brendan Bulger and I got our hands on a copy of this recording, thanks to the generosity of Beth Sweeney at Boston College's Irish Music Center, and selected transcribed six of the sets, then put them together into a modern tribute that revisits, maybe updates, and but most importantly, enjoys that original Irish big band sound. We call ourselves the Boston Highlands Ceili Band, and we're feeling ready to meet Boston's Celtic music crowd, who really did nothing to deserve such treatment.

And you'll get to hear it on Saturday, if you come to BCM Fest.

Personnel includes: Brendan Bulger and Maureen Calvi on fiddle, Chris Bulger and Mike Reynolds on accordion, Helen Kisiel on piano, Larry Flint on bass and Stevie O'Callaghan on drums (the latter two, of the Boston-based Irish band Devri), as well as Glen Carliss on trumpet and Roger Gamache on alto sax, two mates of mine from the Cape Cod-based swing band, Stage Door Canteen. Oh yeah, and me on soprano sax.