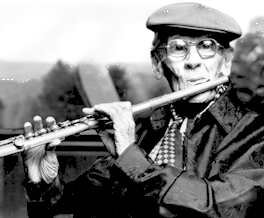 There's nothing like spending the first hour of the day in a bar with a Frenchman.

Don't get too excited. The one I'm talking about has been dead since 1984. And it wasn't really a bar; it was our basement practice room. And, we weren't alone. There was also an ant wandering around til I got all Joan of Arc-y on him with the back of a checkbook.

Marcel Moyse was born in 1889 in France, a famous flute player who pioneered the French sound that those post Romantic guys like Debussy were looking for when they wrote their ultrafamous flute solos like Syrinx and Prelude to the Afternoon of a Faun.

This morning I started working with Moyse's book, De La Sonorité: Art et Technique, which all real flute players know about. You know all about it, don't you? Of course you do, which proves to me that all flute players actually are crazy.

This book offers 25 pages of longtone exercises, for developing tone and control over your sound. Early exercises have the player focus on simply moving from one note to the next, chromatically, and to really listen, to ensure sameness of tone and color between them.

It's a little like asking a construction worker to work on his form by lifting his shovel and moving it toward the ground. Then, without ever touching the ground, stop, then do it again. And again, for like 20 minutes a day. Just to work on form, you know? I know a lot of construction workers who do that, actually. They dig really nice holes.

Just to be one of the guys, like, I gave it a try this morning. Played long notes and listened to them. I do this every day anyway, to start my practice session, but this time I did it with a beret on and a croissant nearby. Voilá! Sonorité instante!

People. Long tones are not as fun as ripping off a ton of reels with the metronome set to 115 BPM.

I am in my NEW practice habit of recording each session.

Truly the truth meter!!!! But I can hear the phrases, or lack thereof, myself.

My hat of the day is a scully!!!! Not sure it is helping.