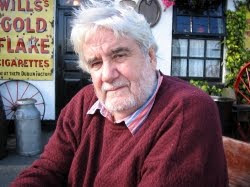 We have only this moment, sparkling like a star in our hand, and melting like a snowflake... Let us use it before it is too late! —Marie Beyon Ray

We're sad to learn of the loss of a great musician, poet, artist, and character in the Boston scene, Dublin-native David O'Docherty. O'Docherty passed away while swimming in Martha's Vineyard. According to the Vineyard Gazette, he had gone to the Vineyard to play tin whistle at the annual Bloomsday celebration in Vineyard Haven, as he does every year. (Bloomsday is June 16, the day the James Joyce's Leopold Bloom character, of Ulysses, set off on his exploits throughout Dublin.) He had gone swimming on Sunday, June 21 at 10 am, and never returned, apparently suffering a heart attack or some other medical event while swimming. He was 75.

It was sad news to the crowd of musicians and friends who gathered here at our house last night to ring in the solstice with Irish music. But, no doubt, O'Docherty would have approved. Just as solstice is a time to celebrate the light that comes out of darkness, so the loss of a friend can remind us of the life we must embrace while we have it. O'Docherty was a real inspiration, and it is only mildly comforting to know that he passed on to the Great Seisiun in the Sky while enjoying the world around him.

For a lovely tribute to O'Docherty, visit today's article in the Vineyard Gazette.
Email Post