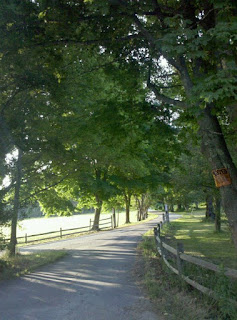 See this lovely shot? Isn't the road inviting? Ignore it. It's NOT an invitation. See that big orange sign to the right? It says, "This is mine. Don't fish here. Don't hunt here. Don't trap here. Don't stop by the side of the road and take pictures here. In fact, I'd rather you not even LOOK here, okay? That's why I picked bright orange. Because I don't want you to look."

Just in case you missed that sign, the owner of this gorgeous road that winds between two luscious horse pastures has also put two white signs on either side of the gate, just where the fence ends, just to remind you. In case you missed it, like.

We didn't miss it.

Just got a call from a dear friend who's just lost his low-paying, menial job. He didn't love the job, but it's a job and he has a family. See, he was told, he wasn't paying attention to directions, work wasn't up to snuff. By the way, this fellow who just lost his job just happens to have a head injury that makes it impossible to follow directions. Of course, he told his bosses that when he got the job. But alas, he lost the job, where he was tending gardens for people who live behind big white gates in a private community whose entrance is marked by a gate and guarded by a little "MINE" booth right at the entrance, with someone in it to tell you to turn right around just in case you thought you might like to see what they have. Lucky people, those people. They still have their jobs, lots of them.

The MINE people have sent most of the boring jobs to China. For the other jobs that they just can't send away ("Who will mulch for me? Who will sweep my floor? Who will paint my house trim?"), they hire illegal immigrants because they work cheaper. But you can't blame them, of course; everyone else charges too much. Or so everyone seems to say.

That's fine. We understand. But has anyone figured out what will happen to people who have head injuries and can't follow directions given to them by the "MINE" people? What do they do to have just a little of "mine" for themselves?

That's not a crack to fall between. That's a fissure.
Email Post