Why Musicians Are Sad that David Bowie Died 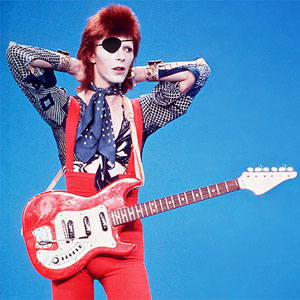 How strange that David Bowie, who died yesterday after a long battle with cancer, could have become a household name. Perhaps only his contemporaries George Clinton et al in Parliament Funkadelic were as bizarre, but Bowie one-upped them with his flamboyant androgyny, challenging public perceptions of sexuality decades before society at large had begrudgingly accepted the “1 in 10” among us. Still, he became a rock legend with a string of chart hits. Mind you, he was drop-dead gorgeous, and by God could he write a song.

His 40-year career traces the chronology of the music industry’s cutting edge, even when his hits were situated smack dab in the middle of the Billboard charts. His 25 albums sold an estimated 140 million copies, including multiple gold, silver, and platinum honors. He appeared in two major motion pictures and held a starring role on Broadway, and later earned a spot in the Rock and Roll Hall of Fame, two Grammy awards, and a rank of 29 in Rolling Stone’s 100 Greatest Rock Artists of all time… not to mention a brand-new album that just came out three days ago.
David Bowie represents a rare circumstance in which society at large willingly accepted creative oddity and its genius—not just carnival oddity, but art oddity, in which there is intention in one’s created persona—and society actually paid for it. With Ziggy Stardust, Bowie embarked on a psychedelic, sequin-studded, gender-crushing extravaganza with clearly no commercial potential—yet we all bought and paid for it, to his great commercial success.

There are certainly artists and musicians out there doing things today as radical as Bowie was in his time, who operate so far outside the lines that we can’t even connect them with the lines anymore—but we don’t see them unless we look, hard. We are in an age where the music industry is controlled by a handful of major labels, and it’s exceedingly rare when the odd acts, the different acts, the ones with “no commercial potential” can get a look-in to the commercial mainstream. The Internet allows independent musicians to self-promote and reach global audiences nearly for free… but what many of these fledgling acts lack is the massive budget Bowie had to stage shimmering spectaculars like Ziggy Stardust. That doesn’t seem to be how the industry is spending its money these days.

To take creative risks, to venture out singlemindedly, obsessively focused on creating a persona, music, a production to go with it, and to do so brazenly in the face of the musical slush that was the “soft-rock” 1970s (and my friend Chris Barrett of Kingsley Flood reminds me "the 70s were the BEST DECADE FOR RECORDED MUSIC SO FAR")—and to do it because that’s where his creativity and his confidence in his direction led him—that’s the bravery that so many of us artists, writers, and musicians crave. To say, “I have something special” and to venture out, unafraid. That’s freedom.

Not all artists can afford that freedom, or perhaps we aren’t all willing to make the infinite sacrifices that a creative life with no apparent commercial potential will undoubtedly entail. Some are too busy making a living to make the art they really envision. Those who do are so rare that they earn their position on our pedestals, ramen noodle by ramen noodle.

That’s why it’s sad when someone like David Bowie dies. With his passing, the world loses a rare genius who encapsulates what we all crave but are unable to live out, day by day: drive, vision, sacrifice, confidence, longevity, and—above all—a personal brand of creative abandon.
Email Post