Folks have been asking: How's the new job?

Well, teaching music to kindergarten and first grade is no easy task. The music part is relatively straightforward, but managing their behavior? Sometimes, but only to myself, I say: "It's hard. Real hard." To everyone else, I say: "I'm a beginner again. Eventually, I'll get it." I've vowed never to say "It's hard," just like I try not to say, "I'm so busy" ... because... yawn. Who cares? We're all busy. And life is hard for all of us.

Here's what I've been saying instead: It's a wild ride to be a beginner again. I left a career at the top of my game, when I felt like I was one of the very best at much of what I was doing. And then I started again, into a job where everyone else is pretty darn good at what they're doing, while I'm the trainee. New kid on the block at age 47.

Some class periods have been fabulous successes. Others have been abject failures. It's almost confidence-killing... that is, if you look at it that way. Here's another way to look at: We've done new things before, and we didn't die. We can do them again.

About five weeks into teaching, I've experienced some brief moments of reward, almost always overshadowed by "Oh sh$t, now what do I do with them?" Midway through my second month, the teeming mass of 72 arms and legs that is a classroom has slowly and loudly subsided into 18 individuals (times 7), and I know a lot of their names now.

Mind you, I'm nowhere near cruise speed, but I have faith that it's coming. Someday the captain will say I can now remove the seatbelt and recline. For now, I'm climbing to altitude speed and that's where the most fuel is burned. Seatbelt on, tray tables stowed safely in the seatback in front of me. Oh, I'm burning lots of fuel, and I can't wait 'til the flight attendant comes around with the drink cart. What sustains the flight for now: The ticket is bought and paid for. I know that I took a risk, made a massive change, and for the right reasons. Someday maybe the job will be rewarding too, but right now, perhaps rather than being on a climbing plane, it's more like I jumped off of it and am doing my best to enjoy the open air rushing by before the parachute opens ... not entirely knowing whether or not the parachute will open, but pretty damn sure it will. 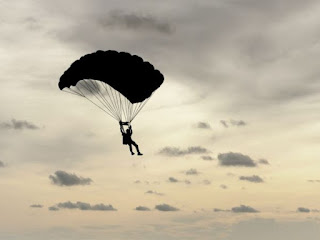 It's hard, alright. And I'd highly recommend it. A good life is built on the faith that the parachute will open, and in the meantime, we will resolve to enjoy the freefall.