Thankful for the Gift of Music 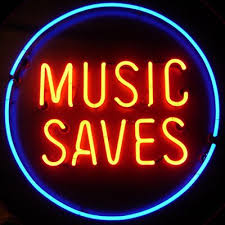 Good morning. I feel that I owe you some life because if you do not have a black sense of humor like me (well earned, I will remind you) it is possible that yesterday's missive confused you. Or depressed you. Or possibly insulted you.

During the tragic and horrible and unexplained decline and death of my brother just over a year ago, my dad's cancer also got worse. Much worse. They were, in fact, in the hospital at the same time. Not too much later, my sister, who has Alzheimer's, had an accident. She earned an extended hospital stay as well, and since that time, things have changed rapidly, and not for the better. Then the other brother with the three strokes, still in hospital two months later.

In the darkest and worst of times, many wise people suggested that a therapist might be a good idea. They were probably right.

Of course, I didn't go. (Who has time?) But I'm getting through it, and I have already healed, not without scars. It may be resolve, it may be inner strength, and it certainly is due in no small part to the loving support of a spouse and many very good friends, but when I look back, I believe that there was something else at work, too—something just as strong but invisible, at once grievous and celebratory, something that both gives and takes in equal measure. A gentle, stern master. Not always nice.

I shall call her Music.

Because in the darkest of times, in the corner at our little weekly gig, while engaged in the bubbling electricity of musicmaking designed specifically to uplift others, I believe that Music was doing its healing work to uplift its maker as well.

As a music teacher, I spend a lot of time trying to understand what it is that gives music its power. Why, when no one can truly articulate its value in any way that I have found convincing, do the doubters STILL keep it in the curriculum? Why are kids allowed to miss math once a week to come downstairs to the music broom closet and hang out with teachers like me in schools nationwide?

Oh, there are lists upon lists. Community, responsibility, the benefit of hard work, math skills, social skills, record keeping skills... the lists of benefits go on. But we can get almost any of those from many other places.

There is something unique that music brings that has nothing to do with anything else, and I've been searching, but I've found few satisfactory answers.

What I do know is that it works. And, God, I am thankful.

Stay tuned, because these are not the last words on this topic.