Embracing the Non-Achiever in the Music Classroom: Lessons in Love and Happiness


Yesterday got me thinking about love, as Valentine's Day is wont to do, and I happened to notice one inspirational poster in the teachers' lounge. I'm sure it's been there all year. In the schools, the walls are plastered with so many inspirational and motivational quotes that they all turn into a whole bunch of well-meaning but largely silent noise. But, as the day did include a lot of reminders of love, my eyes happened to open to this one. How true this is: "If you can't teach them, love them. Love will teach them."

There are some students who are self-motivated and immediately fall in love with music. They play often at home and they come in every week excited to show me what they've learned. These tend to be the kids who had nearly immediate success making music on their instrument of choice. Other kids—sometimes the same kids—have a strong work ethic and sense of discipline, and if they are told that daily practice is required, then by God, they will do it. And both of these kinds of kids, and the sparkly little spectrum between them, learn. They are rewarding to teach and often are easy to love.

Then there are the kids who love music but who have a slower pace of success—sometimes painfully slow. Many is the kid who keeps coming to band but who still hasn't mastered how to read the first five notes on the staff... and yet, often these kids are cheery, early to arrive, and helpful. There is also a set of kids who come most of the time but don't seem to be learning much at all. They rarely make eye contact or conversation, and when they do make sounds on their instrument, it seems that they really could benefit from a regular practice routine at home. Some get very upset that this instrument is so hard. They might drop their instrument in tears and say they aren't very good at it, to which I always add, "YET!" I never fail to encourage them, and though it pains me deeply to say it, I do wonder if they will ever be very good at it. Lots of times, these kids start out very enthusiastic, but as the year progresses and the rate of progress slows, their attendance diminishes. I encourage them to keep trying because only time will tell. I really don't want them to quit.  I still believe.

This last bunch of kids need the most attention but are the most difficult to teach, and it challenges me and probably every music teacher daily that in the typical group-lesson structure—with a half hour lesson of up to eight kids at once, only once a week—it seems impossible to give them the one-on-one attention they need to succeed. It is heartbreaking, because they may be the ones who stand to benefit the most from the self-confidence they could gain from progress. Sometimes (and fortunately) some of these very kids have no emotional attachment to the fact that they are not progressing at the same pace as the other students, so they happily sit there, blasting out all the wrong notes at all the wrong times, with terrible tone—and they are so happy and proud of themselves, and so are their parents. We gotta love those kids! When the band goes right, they go left, but at least that way they got a solo. 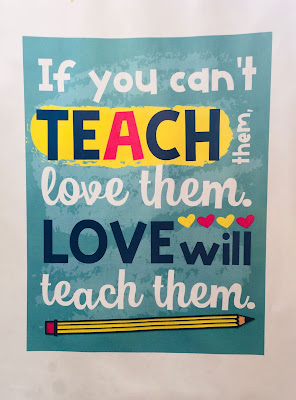 But how do we teach that kid? These slower or "non"-learners matter a great deal, and I have read from veteran teachers that often, this is the very kid that's going to stay in band forever. The kids who are instantly good at music are often instantly good at just about everything—and they have many options for success. Music is just one thing they do well, and unless they feel music in their hearts and souls, they may end up choosing soccer, French, or dance instead.

I don't have an answer yet. Some music teachers I have known are hard on these slower learners/non-practicers in hopes that fear and intimidation will inspire them to practice. Do music and fear go together? And does fear help anyone to improve? My suspicion is no. I choose to offer them love and kindness, in hopes that some day, they will hit their stride and everything will click into place. It might not, and maybe they'll just keep playing and annoy everyone they encounter. Fine, then. In my travels in the Irish traditional music scene in and around Massachusetts and even in Ireland over the last 25 years or so, I have complained endlessly about these "not very good" musicians who show up at sessions and gigs and ruin the music. But by God, by and large, these are typically pretty happy people who are clueless about what the "good" musicians think of them. They keep showing up until someone blows their top and finally yells at them, then they wonder why the rest of the world is ruining their happiness by being so mean.

BUT... On repeat: They are generally happy people.

So maybe our nonacheivers know something we don't. Let's learn from them.