So how did Fresh Start Monday go? 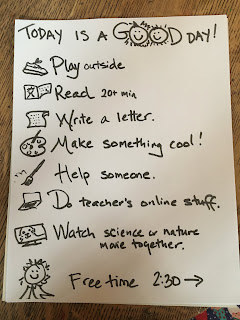 Well, after we talked, I started the day with a great idea: a daily fun sheet. (I actually made this.)  Structure! Low key and approachable, it was. Everything is so positive; note I did not even say "Chores" or "Get Off Your Arse for the 15th time!" Emphasizing service to others and a spirit of cooperation, I even said "Help Someone" and "Watch Documentary" with the important qualifier: "together." Check us out. Such a cohesive, cooperative family unit. We are so damn cute.

Here's how it went.

Play outside! We did that. Well, they did. Little Lord Fauntleroy ran around in the rain barefoot in his too-small pajamas for at least five minutes. Soul Fry went with Dad to Stephens Field and chalked "Stay Positive" below a giant flower on an empty blackboard at the shuttered concession stand. Then they walked on the beach with the dog. That was nice. I stayed home and made pizza dough.

Read. Yeah, well.... You know what? We read to Soul Fry from the minute she could breathe until she was about 9. For hours and hours. Guess what? She hates reading. And Fauntleroy? He likes Pokemon. (Yes, I thought of buying Pokemon book. But we have at least 200 other children's books here; I do not lie.)

Do teacher's online stuff. Lord Fauntleroy started his day with this—coding games on the school website, because when he woke, Headmaster Eve was still finishing her lesson plans and no one else was awake. This went on for several hours, and may or may not have brought him somehow to YouTube, and no one knows how he got there and no one realized he was there til at least noon. Perhaps the headmasters were involved in a planning meeting. Or wandering around aimlessly drinking tea. (Tea every hour, for an hour, all day til 5. We won't run out of tea because mother in law in Ireland has been prepping us for the Tea-pocalypse for several decades.)

Write: Fauntleroy finally made a scavenger hunt for Eve at 6:00. It happened just around the time she had announced very loudly to The Void that she was done for the day and finally going to sit down. The hunt involved a lot of walking around the house looking for strange objects (and complaining about it; perfect mother). Soul Fry made beautiful hand-made cards.

Watch documentary: As I was working on my online lessons for the very eager (that's a lie) students at home, I heard foreboding music from the living room. And the word "pandemic" and "Spanish flu" and "13th century Europe." I guess that counts as a documentary. Positive, advisable, uplifting material for anxious teen. On today's list, the documentary imperative has a note, "NATIONAL GEOGRAPHIC" next to it in blue pen. That way, she can watch something about how man is destroying nature, rather than humanity. With nicer music. Maybe together this time. We might even hold hands.

Make Something Cool. Soul Fry: She'll do it all day, whether it's on the list or not, while a documentary blah blah blahs in the background. So much art has been made in our confinement. As for Little Lord: Well, we tried. We took out the PlayDo bin and were going to make the coolest Pokemon guy ever, when we discovered a baggie of long-lost Pokemon cards in the PlayDough box. After Bansheelike screams of excitement, this devolved into a video sent to his best friend, which turned into a 90-minute conference call to discuss Pokemon with his best friend. "Poopie head" was said a lot. Mom played transcribed solos from the Charlie Parker Omnibook in the other room. OH MY GOD I LOVE CHARLIE PARKER.

Help someone. LLF did clean up his PlayDo two hours later, and there is a chance that someone threw themselves on their beds and cried on their stomach at the unfairness of being asked to vacuum the living room. (It may have been me.) It is possible that Dr. Eve later asked Dr. Adam to time her while she vacuumed it herself and put away the vac. Total time: 2.5 minutes. Timer waved in student's face. Successful lesson.

Free Time. Well, that kind of happened all day. It starts when no one's looking and ends when Eve stops making videos (that only 5/150 of her music students will watch) to yell at everyone to get off their arses and do something.

As for all the other things that were on my own list yesterday, well... I'm a mother. Of COURSE I switched from beer to vodka. As for the rest of those things, I'll get to those once the kids go to college—assuming this nagging dry cough turns out to be just allergies. Meanwhile, I'll continue to swear at the dog, then lie next to him on the floor blubbering apologies through my tears.**

**No dogs were actually sworn at. That's a promise. xo