A little Irish music history this morning because female saxophonists are always eager to find ancestors. Zandra Mitchell, pandemic fascination, brought to our attention by a forward from my friend Caroline. 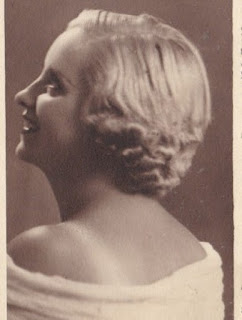 Alexandra Josephine Mitchell, Dublin-born saxophonist. Born 1903 and raised on 117 Royce Terrace beside the Cross Guns Bridge in Phibsborough. Phibsborough was a relatively new-at-the-time suburb on the north side of Dublin, lined with Victorian red-brick buildings and crisscrossed with tram lines as they wended their way to the terminus of the railway line at Broadstone. By the turn of the twentieth century, the train had claimed victory at last over the Royal Canal, which stank its way the gritty heart of frustrated, cholera-ridden pre-Rebellion Dublin, and now the tram station was the cornerstone of Phibsborough. Bordering the rebel Cabra, Phisborough sits smack-dab in the heart of Irish history, home as it was to Dublin chronicler James Joyce, revolutionary and future president Eamon de Valera, and just steps to where the old triangle went jingle jangle outside of Mountjoy Jail.Pre-World War I tensions were still bubbling and jazz was only beginning to sweep the world when Zandra first got a saxophone into her hands. Alexandra, as her parents called her, was the second born in a music family headed up by Joseph and Gussie Mitchell, founders of the Cremona String Band, a popular dance band that performed around Dublin until the 1920s.

Zandra took to the horn immediately, helped along by musical parents, and was ready to play her first gig in Dublin at age 11 in 1914. Not too many years later, she left Dublin with her brother Edwin as the smoke was only clearing from the 1916 rebellion. He brought her along as a novelty act to play a series of jazz shows in in London, as the music was beginning to take hold among white audiences in the US as well. A young teen in her prime, Josephine, or Zandra as she was called on stage, was spotted and invited to join a touring jazz band. She performed with The Irene Davis Band in Britain and The Russian Ladies Band. She toured in Switzerland and Germany, settling in Berlin in the height of the jazz era in her early 20s, getting the chance to sit in with touring US bands such as legends Coleman Hawkins and Jean ‘Django’ Reinhardt. She settled in Germany during the Weimar Republic and went on to form Baby Mitchell And Her Original Queens Of Jazz in the 1930s.

She settled in Germany during the Weimar Republic and fronted her own touring band, Baby Mitchell and her Original Queens of Jazz. The band toured Europe and even Tripoli, Africa. The jazz life, even in Europe, operated by its own social rules, and Zandra broke a few of those, herself. While in Berlin she gave birth to a daughter outside of wedlock and gave the child to a Russian couple. Meanwhile Hitler was coming to power in Germany, and she witnessed firsthand the transition from the artistic freedom of the Weimar Republic to the cruelty of the Nazi regime. Hitler deemed jazz the work of the devil; jazz musicians its handmaidens—and much the same was the attitude in Ireland, as well, but to a different population and for a slightly different reason. In a letter to her parents in Ireland in 1935, she wrote of the government closing down dance halls and banning jazz music. She was one of only 40 Irish citizens who remained in Germany during the World War II, and soon after wed a Belgian man in a marriage of convenience to get out of Germany “to escape the advancing Russians.”

When Zandra returned to Ireland some time later, she eventually moved to her family’s holiday home in the seaside village of Rossnowlagh, Donegal. She played some gigs in Donegal and Sligo in the ’60s and ’70s and is still fondly remembered by local musicians who also played at the time, among them the postmaster Michael Gallagher, who is also a musician. With Michael as one of her only friends, Zandra ended up a recluse, living in the basement of her house—some even said the bathroom. She shared her story with him but insisted he tell no story until after her death.
There's a wonderful podcast interview about her life here, https://www.thejournal.ie/josephine-alexandra-mitchell/news/ and a one-woman play Zandra, Queen of Jazz, based on her life. Starring Roseanne Lynch, it was produced by Darn Skippy Productions and premiered November 2019 in Dublin, Ireland. Directed by Katherine Soloviev and with original music and sound design by Richard Lennon.