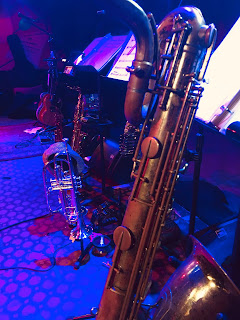 A friend shared this with me yesterday; it was a person's response to my "Music Is Love" post:
Boy, I'm never in a poetic frame of mind when I'm doing music.
Too focused on mechanics of playing and getting the job done well.
I must have been absent the day the angels waved the poetic/mystic wand.
Hi Sweet Beautiful Person! I have thought just like that before. I promise you, you were not absent that day. I'm a music teacher; I believe that everyone can play music. And I believe that you were in line, you got your package, and you opened it. You clearly saw that the wand was also a cattle prod; maybe you didn't realize it was also a bit of kindling. Use it, then burn it. It's all about work then release, I think. That state of freedom I called a "place that is bigger than ourselves, where there is beauty and calm and silence in the sound"...People call that "flow." Some people even call that "God's presence." For me, it's a personal nirvana. But reaching that state of flow didn't just happen by magic. It took a little bit of money (not too much) and never enough time. It took a lot of bad gigs and giving up and starting again about 146 times until I finally accepted that this is what I do. It took a lot of very doable work, both physical and most important of all, spiritual, and then release. It didn't just come, but in truth, I never actually gave up.

So, on this note (pun terribly intended), three things immediately come to mind. These are the most important lessons music has taught me, and I hope I can get my students on the road to learning these things themselves, too. Here's what I think it took:
Believe in time, AKA sustained practice.  Yesterday, one of my coworkers was marveling at a student of hers who said he'd been teaching music for 39 years. "Have YOU ever done anything for 39 years, Sue?" she asked. "Yes," I said, after about three seconds of thought. "Playing saxophone." I started when I was 9; I'm 51 now. In those 42 years, there have been many seasons of diligent practice, but there have also been focused seasons of mountain bike racing, taking courses in children's book illustration, then weight lifting, raising children, and drinking beer. The consistent and diligent practice got me a bachelors and masters degree in music (for what those are worth) and a lot of folk music gigs (worth about the cost of two to five lessons each). Throughout, practice has been the inconsistent constant. Look back ten years to the very beginning of this blog; this blog started as "100 Days of Practice," in which I wrote every day about practice and life as a musician. I was having so much fun that I expanded that to 365 days. Then I fell off the wagon. I have not practiced every day of my life. But I keep trying. I keep coming back.
Accept that imperfection is the most normal state of all things. Some of the frustrating moments I have encountered along the way as a musician came when I felt I wasn't reaching a bar I'd set for myself. About 15 years ago, I went with my friends Bill and Lorna to see Matt and Shannon Heaton at Club Passim. We left the show, and I said, "You know, I'll never be as good as Shannon." They were horrified I should feel that way and, like the great friends they both are, they assured me that was not true. But you know what? I was right! Shannon is wonderful. Her flute playing sounds as smooth and effortless as rich, dark chocolate. I'll never play like Shannon Heaton. But do I care? Not really, not any more, because I'm not Shannon Heaton. Shannon, and about ten million other musicians, are far "better" than me, and that's fine. I do play music professionally, but I still screw up on stage sometimes. I won't make it to Carnegie Hall. That's ok, because I make music locally. Our "fans" have become our friends, and they have become friends with each other. We play their weddings, their anniversaries, their funerals. Those things matter more than a sold-out stadium. Mantra: I am imperfect. So is my music. But people seem to like it and it brings them somewhere, which is enough for me. Key: It's not about me.
Which brings us to the next thing.
Maintaining perspective is a discipline. It's. Not. About. Me. What is music about? It is about sharing something with our audience. I find that when I stop thinking about myself and what I'm doing, and start thinking about the audience and how I hope that music makes them feel, I stop noticing that it is my body that is making that music. I have to make conscious effort in this regard. But when I do, I become an instrument. The music itself is the driver, and it is just my job to bring sounds from heart to heart. That's why I say "Music is love."
When we walk, we no longer think, "Step, step, step, step, step." But when we were twelve months old, we probably did. At some point in our musical development, we must think about what we are doing. Once we get enough practice at it, we can stop thinking about it. And when we've had a lot of practice but discover that we are still always thinking about it, other things are probably at play—things we can totally work through. In those moments, I find freedom when I can 1) Accept that making a mistake is pretty okay, and 2) Remember that it's really about the audience, not the musician.
So... Time and grace and love, these three things abide. But the greatest of these is music, and that seems to work.
Me, I still make mistakes. Audiences keep coming back. It's all good.
Email Post
Labels: 100 Days of Practice General Musings Meditation and Music Music Education Practice Tips Spirituality Tradition and Innovation